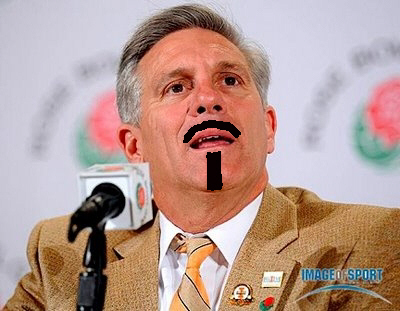 Ah, like the swallows returning to San Capistrano, not ever knowing the reason for their journey other than subconscious instinct, the Big Ten football coaches make their return to Chicago for Big Ten Media Days, starting today and running through Tuesday's luncheon (which won't be televised until Saturday; after Pat Fitzgerald's unfortunate toast at last year's luncheon, the censors needed some extra time to edit this year's footage).

Many blogs (including SBN stalwarts Maize n' Brew, Hail to the Orange, and Bucky's Fifth Quarter) are going to be in attendance, eagerly transcribing the never-ending string of expectation-reducing nonsense spewing forth from the conference's top dogs.  We tried to get credentialed, but were denied when BXI officials learned of our idea to dress up as J Leman and ask every coach for his position statement on text message-based mind control.

That's not to say that the BHGP coverage won't be improved this year; far from it, in fact.  First, we're happy to announce the return of BHGP Senior Media Days Correspondent Bob Zook, who arrived in Chicago last night after a four-day hitchhike from Uncle Bob's Self Storage in Pensacola.  As always, Bob plans on spending his days asking hard-hitting questions about scent-deficit disorders and his nights regaling the congregated child-supervising MILFs at the Holiday Inn Express indoor pool with stories of his escapades in the Nicaraguan Civil War.

But that's not all.  Not only will Bob be filing formal reports from the front lines, but he'll be joining the staff of BHGP on Twitter throughout the day.  Follow the action in 140 character bursts from the founding fathers (@BHGP), from the mind of Coach Ferentz (@NotKirkFerentz), and live on site (the all-new @BobZookROLLIN).  Festivities kick off at 10:00 CST.  We've already been tailgating.