Share All sharing options for: It's Not Plagiarism If You Link To It Is Living In Your Flatscreen

Why Bother?  It's Gonna Hurt Me.  It's Gonna Kill When You Desert Me.  There's no real reason to read INP today, because the one and only absolute must-read of the entire offseason is over at the newly-retooled On Iowa.  BHGP Friend of the Program Marc Morehouse breaks in his new digs with his recent interview of Kirk Ferentz.  It's not your ordinary Ferentz boilerplate, either; this is the single most comprehensive Ferentz interview we've ever read.  Over the course of 45 minutes, Coach Ferentz discusses the yearly NFL rumors, player arrests and his philosophy on discipline, recruiting in the age of Rivals and Scout, his emphasis on staff continuity, the fan perceptions that come from being the highest-paid state employee, and (maybe most important to us) his views on the internet and technology:

KF: No, absolutely no.

ME: Do you know what it is?

KF: Yes, I heard it mentioned on the radio coming into work this morning, Mike and Mike in the Morning, (football commentator Mark) Schlereth and his tweets and Twitters. I think I even have my usage of tweet and Twitter down. You never say never, but if you see me with a Twitter account, just hit me with a baseball bat. Go ahead, take a whack at me.

KF: I’m not ready to go down that road. I think this might be one of the dumbest inventions in the history of mankind. I don’t have a BlackBerry yet, either. That’s one of my professional goals. I might get one when I retire, when I have nothing to do.

ME: Do you go on the internet?

KF: I never go on the internet, unless I’m looking over someone’s shoulder.

ME: Then, you probably don’t need a BlackBerry.

KF: If it’s important, call me. That’s my motto.

KF: Got one in my car. Don’t know how to use it. I know how to get our film. That’s all that counts. I know that computer. That’s the only one I know how to use. I don’t know everything, but I know what’s important on there. I don’t know anything about business, but I think part of the problem with our economy right now is how much time we waste on these technological thingies we have now. It’s like March Madness 12 months a year.

Immediately after the interview, Ferentz took to his Twitter account to show everyone how he pulled one over on Morehouse.

In all seriousness, this isn't just an interview; it's an all-too-rare look into the psyche of a man who oversees so much of our obsession.  It explains much of what we consider inexplicable (especially regarding the staff and recruiting).  It is at once enlightening and intriguing, frightening and cathartic.  The entire interview is worth at least two reads, and bravo to Morehouse for scoring the opportunity and taking full advantage once he had it.

Cornshoe Hammaker Rides Again!  Remember when BHGP commenter (and frequent Joe Paterno dream character/zombie president killer) Cornshoe Hammaker met J Leman outside Kinnick Stadium before the Iowa-Penn State game and, in the process, blew the lid off the greatest conspiracy of our times?  His story started with this:

Yeah, I ran out on the field (no, not the first time, I actually waited until the game was over).

Yeah, that was me discovering Daniel Murray, nearly buried under a sea of humaniity in the middle of the field.

Yeah, that was me, pulling him to his feet and guiding him to the safety of the sideline.

Yeah, that was me, front and center on your TV screen in the post game celebration.

During my monthly screening of that game yesterday, I obtained visual confirmation: 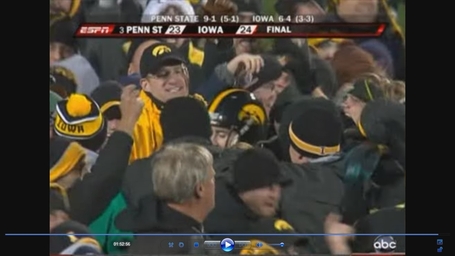 That's Cornshoe, with a George Patton-like look of strain on his face, repeatedly hitting Daniel Murray in the head.  Well done, sir (but next time, would it be so much to ask that you threw on a BHGP shirt?)

This is all to say that the Iowa-PSU game is being replayed on the Big Ten Network at 4:00 CST this afternoon, after Day One coverage of Big Ten Media Days and a replay of PSU-OSU.  It's the closest BTN gets to must-see TV in July.  Watch the game.  Watch the kick.  Watch the ritualistic pummeling of a defenseless placekicker by one of your own.