Share All sharing options for: It's Not Plagiarism If You Link To It Treats Objects Like Women 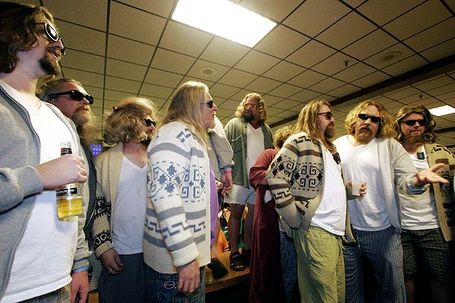 "What, you mean coitus?"

I Can Get You a Toe by 3:00.  With Nail Polish.  Clearly not Iowa-related, but too good to pass up: ESPN.com's Jim Caple made the trip to Seattle's Lebowskifest, where fans of the funniest movie ever made (yeah, I said it) dress up in costume, congregate in a bowling alley, and drink white Russians.  Lebowskifests have been held across the country over the last decade, usually attended by one or two bit players from the movie (when a friend of mine went to the San Francisco Lebowskifest a few years ago, he met Liam (Jesus' bowling partner) and the Ralph's check-out girl).  Unique to this one (as far as I know) was the presence of the real-life Dude himself, Jeff Dowd.  In discussing the Coen Brothers with Caple, Dowd gave the most apt description I've ever heard:

''Those two guys make movies that are an homage to genres and 'Lebowski' obviously is very much a Raymond Chandler, classic L.A. crime story put together with a buddy movie and injected with lots of nitrous oxide and acid," Dowd said.

From the description of the costumes (someone actually brought an iron lung, just to accurately depict Branded writer Arthur Digby Sellers) to the discussion of how the movie improves with each viewing, the entire column is a treat.

Much Ado About Nothing.  Kirk Ferentz, fresh off his contract signing (and, presumably, last summer vacation taken by automobile), took some time to address the media and answer the lingering injury and suspension questions.  As usual, Captain Kirk played everything close to the vest, declining an invitation to give specifics on the Calloway and Prater suspensions or Vandevelde's injury (though we now know Riley Reiff is keeping his clothes on).  He did, however, discuss Jewel Hampton's on-again off-again flirtation with knee problems.  Ferentz is optimistic:

Hampton, a 5-foot-9, 210-pound sophomore, suffered a knee injury during conditioning drills on July 3. His status has been up in the air since. Through Iowa radio play-by-play voice Gary Dolphin, Ferentz said a week ago that Hampton could be ready for the Sept. 5 opener against Northern Iowa.

Thursday, Ferentz said it looks positive for Hampton, who, behind Doak Walker Award winner Shonn Greene, put up one of the best seasons ever for a true freshman running back at Iowa, gaining 463 yards and scoring seven rushing TDs. He also averaged 23.3 yards a kick return, which was sixth in the Big Ten.

"We’re hopeful, we’re optimistically hopeful," Ferentz said. "He injured his knee. All signs have been very, very positive since that time.

"We’ll certainly know more when we hit the practice field, maybe sooner. But I think right now everything’s been very positive. We’re optimistic that we’re going to be there."

As Adam Rittenberg points out, Hampton represents 94% of Iowa's returning rushing yardage from last season.  Just the fact that he could see a practice field in August is clearly a good sign; Ferentz has been known to hold players out of August camp for far less than an ACL sprain.  Things are looking up; adjust your depth chart accordingly.

WIN FIGHT TRY BEST BUY THIS SHIRT COMPETE.  "It's early," you might say.  "I don't need to buy a shirt for a game that is 4 months away."  To which I respond, "Is it ever too early for mockery?  Is it ever too early to approach your rodent-loving coworkers and cackle at their chosen football team's ineptitude?  Are the cockles of your heart not warmed with the glow of swift, sudden, furious victory?"  Then let there be much rejoicing. 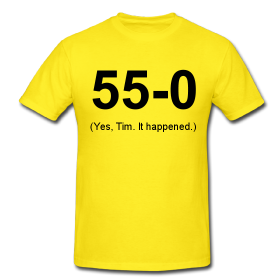