Share All sharing options for: It's Not Plagiarism If You Link To It Is Stuck in the Doldrums

I Got Nothing.  You know it's been a slow news week when the biggest Iowa-related story of the last two days is the ESPN.com BXI blog season preview.  Rittenberg believes Iowa will split the road schedule (which, let's face it, is the best possible realistic scenario), Stanzi will be all-conference, and Spievey and Angerer will keep turnovers high.  I can't disagree with the first two.  However, expecting interception totals to stay up when (1) most conference quarterbacks return with a year of starting experience under their belt, (2) Illinois (and pick-happy Juice Williams) rotate off the schedule, and (3) the Iowa run defense almost has no choice but to regress, meaning fewer passes from opposing offenses, might be expecting too much.

This Man Is a College Football Hall of Famer. 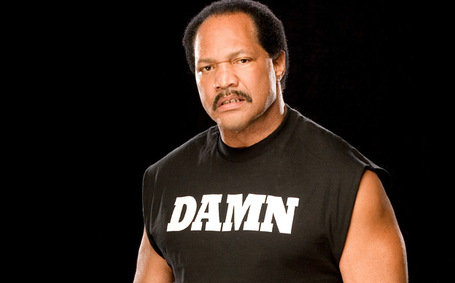 And rightfully so.  Not only was he a legendary nose tackle at Florida State, but the Nation of Domination pretty much created The Rock.  A grateful nation salutes you, Ron Simmons.