Share All sharing options for: It's Not Plagiarism If You Link To It Deserves a Free Sandwich 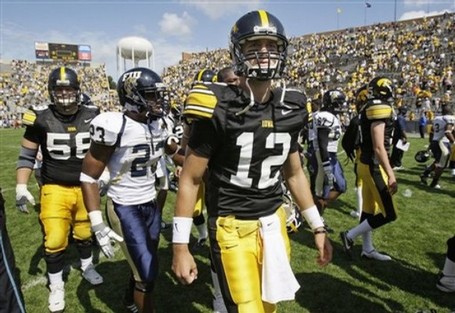 All Eyes on The Manzi.  ESPN.com Big Ten blogguer Adam Rittenberg profiles Dick Stanzi.  It doesn't take long for him to come to the only obvious conclusion from last season: Stanzi improved as the season progressed, but won't have the luxury of Shonn Greene this year and must cut down on the turnovers.  Interesting, though, is Stanzi's response to the STANZIBALL criticism:

"It's just being conscious of what you're doing out there," he said. "I know there's been times when I've turned the ball over too much. That's obvious. You can write that down as a stat. At the same time, it's not going to change my style of play because if I start doing that, you're pulling back from something that helps you make some plays."

This is especially intriguing given the longstanding theory (right or wrong) that Jake Christensen became so afraid of the interception that he refused to throw the ball in anything but the most favorable of circumstances.  That never has been a problem for Stanzi, and it's clearly not going to become one.  The momentum-killing turnovers were less frequent as the season progressed, but SDS was still loose enough to take a shot downfield or throw into tight coverage when necessary; for us, that's enough.

Hands Off the Roast Beef.  OPS has some good stories from his days as a sports reporter, but my personal favorite is Gary Dolphin at basketball media day.  As usual, the Athletic Department set up a table for sandwiches and finger foods and a fountain soda machine, so that the reporters could maintain their slothiness while ostensibly doing their jobs.  Gary Dolphin approached the soda machine and jokingly (we hope) asked which button dispensed the Tanqueray; without missing a beat, another reporter replied, "Zabel already drank it all."

Well, turn out the lights.  The party's over:

Iowa has cut the free buffet line from its media day budget. Plus, the shiny media guides won’t be available, either. Iowa will send them to Chicago for Big Ten Media Days but the media guides won’t be available for local media. Iowa instead will provide their fact books (which has much more useful information anyway) to media attending the event, which is scheduled for Aug. 7.

So, how many of you wanna bet that a good 20 percent of the media day posse decides not to attend media day because there’s no free meal or free media guide? ...[T]he smaller radio and newspaper outlets that often showed up for a free meal, a free media guide and the chance to meet Iowa Coach Kirk Ferentz will vaporize faster than you can say "seconds." It’s kind of sad that the sports media gets this well-earned reputation.

I've done some remarkably stupid and boring things in the name of a free lunch, so I can't really criticize reporters for skipping out on Media Day (which, let's face it, is all fluff and choreographed photo ops anyway) because someone took their chicken salad.  But there's something beautifully counterintuitive about the fact that the athletic department is drawing criticism for providing something the reporters can actually use, rather than the "media guides" produced more for recruiting and fundraising.  When we say we don't want media credentials, this is what we're talking about.  The day that it takes a buffet line, a cell phone picture with the coach, and a glossy brochure to get us to do our jobs is the day we'll close this shop.

Footnotes:  In the least-shocking story of all time, Iowa State gets a bigger payout for playing in Kinnick than Iowa gets for going to Jack Trice.  Payouts on this can't-win series are based on attendance, and Kinnick holds about 15,000 more at a higher per-seat price.  The only benefit for Iowa?  According to Bill James, win and you're bowlin'.  Fight For Iowa compiles youtubery of Iowa's football commits; it's only camp footage, but Austin Vier might have a better chance of making the team as a quarterback than anyone thinks.  Ron Zook gets a one-year extension at the same pay, which is the BCS-conference equivalent of "don't look now, but your ass is on fire."