Share All sharing options for: Assume the Position 2009: Tight End 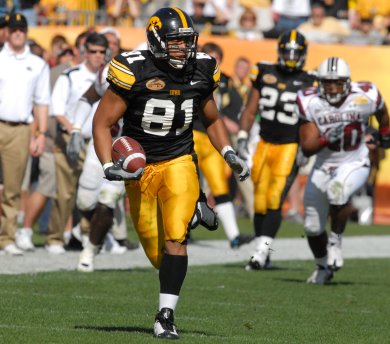 I'll give you a topic: The Flyin' Hawaiian is neither flying nor Hawaiian.  Discuss.

In normal circumstances, tight end would be a top three ATP selection.  A top-flight senior returning for his nineteenth fifth season, ordained as the starter two years ago (wow, did that jackass get it wrong) with the vexatious almagam of route-running/pass-catching/linebacker-blocking ability needed from an Iowa tight end and no real competition from below, would look like a certain starter for all 12 weeks.

Tony Moeaki (#81, 6'4", 250, Senior) - I think it's safe to say that Tony Moeaki is the biggest wild card on this year's squad.  There is no doubting his God-given abilities; when healthy, he has been that rare member of the Class of 2005 that has actually lived up to the hype.  Two seasons ago, he made JC6 look like Dan Marino in both players' signature game at Iowa, the 35-0 shellacking of an admittedly inferior Syracuse.  Moeaki caught 8 passes for 112 yards and 3 scores that day, then had his arm asplode into 29 pieces two weeks later against Wisconsin and missed the rest of the campaign.  In 2008, he missed 5 games completely and played sparingly in 5 others; essentially, his entire season was Michigan State, Minnesota, and the Outback Bowl.  Sadly, a player formerly known as the tight end version of Cris "just catches touchdowns" Carter only recorded one score last season (against Minnesota, of course, because everyone scored against Minnesota).  He then sat out the spring after another surgery on the foot that kept him out most of the season.

In 2007, Moeaki's absence was one of the primary causes for the collapse of the offense, as Brandon Myers was quite clearly not yet ready for prime time.  Last year, Moeaki's absence turned Myers into an NFL (well, Raiders) draft pick.  Given Reisner's lack of experience, it's 2007 all over again.  If Moeaki is healthy and KOK keeps calling that stupid roll-one-way-throw-it-back-the-other-way-like-we're-playing-motherfucking-Madden-99 tight end screen pass, he'll be the straw that stirs the drink.  When If he's hurt, we'll find out just what we have in the tank.  Let's just hope, for everyone's sake, that Tony can finally survive an entire season in one piece.

Allen Reisner (#82, 6'3", 235, Junior) - Let's face it: He's going to play, and not just garbage time.  All things considered, that might not be a bad thing.  Reisner, a universal 2-star from Cedar Rapids Marion, learned at the foot of Moeaki and Myers for the past two seasons and got limited snaps last season as the de facto backup in Moeaki's absence.  He caught 11 passes last year, all in the five games where Moeaki couldn't play.  What he lacked in quantity, he made up for in quality:  He averaged 18 yards per reception and picked up a late touchdown against Wisconsin.  His stat line actually stands up well against Moeaki's; put the two together and it's a good season for a tight end.

I think we have ourselves a winner, folks.  Herman was the rare 3-star recruit who nobody wanted.  Finally, he sent a game tape to Iowa and had an offer 5 days later.  Since the moment he hit campus, the coaches have raved about his play (in that, they have mentioned him more than once despite the fact he's only on special teams; there's never too much raving from Ferentz and Co.)  It looks like the experiment with linebacker is over; given his size and the depth at that spot, it's probably a wise move.  When Moeaki finally finishes his starcrossed career this fall, Reisner will get his shot for one season, but make no mistake: Herman is the heir apparent.  Look for him this season.  He'll be the one running pass patterns in a linebacker's jersey.

Kyle Spalding (#30, 6'5", 250, Senior) - OK, so he's probably not going to play (he's sharing a number with Brett Greenwood, and one of those things is not like the other), but the guy is a senior 4-year walk-on who has never stepped foot on the field during a game, let alone caught a pass.  That kind of dedication to the program, without the smallest of rewards whatsoever, deserves a mention.  Plus his mugshot is positively sublime.