Share All sharing options for: It's Not Plagiarism If You Link To It Threw a Controller Through the Television 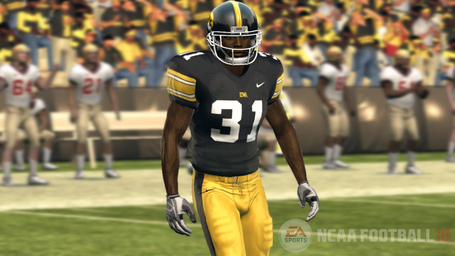 I Would Type More, but My Thumbs Are Sore.  We're a couple of days late (mostly because we were spending every waking moment playing it) but Happy NCAA Football 2010 Day, everyone!  Not only does this give us something to occupy our time during the next 300 days, but it signals the beginning of the end.  NCAA Football release day is our Fort Walla Walla, the final outpost before our one last push to Oregon.  There's only 52 days to go, 44 of which can be spent playing Online Dynasty.

As for the game, yeah, it's pretty fucking sweet (if a bit gimmicky).  I skipped NCAAs '08 and '09, so I haven't been exposed to some of the upgrades of the past couple of years (and don't know what is actually new vs. just new to me).  That being said, MJD is right: the online team creator is a fantastic idea:

There's one new feature to this year's game that I count as a major advancement, and something that every single team sports game created in the future should have: Online TeamBuilder

You no longer "Create a School" through the game's menus; you actually go online, upload your own logos, and customize every single thing about a team. If I want to create the Yahoo! Sports University Dr. Saturdays, not only can I do it, but I can put Matt Hinton's mugshot on the side of my helmets, and a picture of him eating garlic balls at midfield of my stadium. I'm not going to, but I could.

We should be past the days of 20 lame logos and four uniform styles, and finally, we are. I don't know if this is a feature they plan to introduce for Madden, too, but if not, it's finally that one awesome feature present in NCAA that isn't available in the "big brother" franchise.

The other features are meh: "Road to Glory" is essentially Campus Legend with OMG ERIN ANDREWS (and has there ever been an easier videogame feature to "beat" than Campus Legend?  I made Tim Tebow look like Austin Arnaud en route to 4 Heismans).  But, as an avid Dynasty participant, the offseason tools keep getting better (and are positively sublime with an online upgrade, I'm told).  Best of all, you still get to play in the Metrodome.  All in all, it's well worth the cost.

There Is no Present or Future, Only the Past, Happening Over and Over Again, Now.  Alabama fans, after years of denial, finally concede that conference championship games don't mean shit:

RBR goes on to (correctly) point out that the Big Ten's eight-game format is less-than-perfect, but comes to his senses on the central point:  The Pac-10 round robin is really the only way of crowning a champion.  As an example of the absurdity of conference divisions and championships determined by a single December meeting, RBR points to the MAC:

The 2008 MAC Championship Game is the preeminent example of what is wrong with conference championship games. A 12-0 (8-0) Ball State faces a 7-5 (5-3) Buffalo team and ends up crapping the bed and the MAC winds up with an 8-5 champion and a 12-1 runner up. During the regular season, in a 12 team conference, the two eventual divisional champs shared five common opponents from an eight game conference schedule. If you remove the two teams in question, they only shared 50% of the same possible opponents in their conference. How is that a measure of the best in the league? I digress though. Among those five common opponents, Ball State was 5-0 and Buffalo was 2-3. Buffalo would've finished with the fourth best record in Ball State's division, yet by the disastrous possibilities a divided conference allows, a mediocre, middle of the pack team gets hot for one game and becomes champion. Madness. Sheer madness.

Is there anyone that really believes Buffalo was the best team in the MAC last year? I can hear the scoffers now saying, "That'll never happen in the SEC" and it may not happen ever (though that's unlikely based on a sample set that theoretically will be infinite)...or it may only happen once before the end of the world, but the fact that it's a statistical possibility should bother people. The two best teams in the MAC didn't face each other last year, but because of "playoff obsession" and the accident of geography, a team that shouldn't have been at the table was allowed a roll of the dice...and they won.

I don't mean to be argumentative, but anyone who thinks that a MAC scenario can't happen in a major-conference championship needs to contact the Big XII, which has had no less than five teams ranked in the AP top 3 beaten by lesser-rated opponents in its conference championship game.  Four of those five teams would have unquestionably played for the crystal football had there not been an extra game, and the fifth had a chance.  The MAC Conundrum isn't limited to the MAC; its scope is broad, and its cruelty is stunning.

With that said, I'm totally on board with taking every conference back to 10 teams and playing a 9-game conference round robin, as the Pac-10 does.  Just Northwestern, that's your cue.  Western Michigan needs a rival.

Outside Programming Note:  Yours truly joined the guys from Maize n' Brew and Eleven Warriors for their inaugural podcast.  Topics included Bryan Bulaga, Swingin' Dick Stanzi, the universal reach of BHGP, the Hadron supercollider, expectations for the upcoming season, and how my laptop microphone makes me sound like one of the adults on the Peanuts cartoons.  Before they got to me, the right honorable gentlemen talked Big Ten football with Matt Hinton of Dr. Saturday fame, so go for the intelligent commentary and stay for the poop jokes!  (It doesn't look like the recording is up and running yet at those sites, but I'm assuming it will be working later today.)

Footnotes   A melancholy (and hopefully temporary) goodbye to Paging Jim Shikenjanski (I can't believe I spelled that right on the first attempt), who has started his own public relations business and, due to time constraints, given up his seat at The Daily Gopher.  The University of Texas student newspaper ranks Iowa #23, clearly as an homage to Shonn Greene.  Doc Saturday tries to break the internet by linking to a BHGP post which linked to a Doc Saturday post.  As I said on the Eleven Brews show, this is how black holes get started.