Share All sharing options for: It's Not Plagiarism If You Link To It Is Growing Out The Ol' Beardaroo

Ricky Stanzi can adequately grow facial hair. Adjust prognostications accordingly: IowaHawkeyes.net, which will be keeping that site name for precisely however long it takes the UI athletic department to find out about it plus 0.5 seconds, found a video on YouTube of Ricky Stanzi being interviewed. Anything to learn from it? Absolutely not, except that he's already better at cultivating mutton chops than Hawkeye State ever will be:

Seriously, we don't expect summer interviews to be very hard-hitting, but what the hell was that? I feel like literally all the interviewer had going in his head about Stanzi was "took over mid-season, won the last four games, let's do this." And yet, that's Marc Engelbert, the director of video operations for the athletic department. He's not clueless, he's just a propagandist!

Hey neat more Hall of Ferentz articles about offensive linemOH MY GOD WHAT THE HELL HAPPENED TO HIS KNEE: Marc Morehouse keeps rolling with his "Hall of Ferentz" series, which you already know since it was in the headline. Guard and center are up today (just a hunch, but we think Lee Gray's taking the tackle spot), and while we can't argue with the selections (SPOILER ALERT: Steinbach, Nelson), we can argue with the editorial decision to run this picture: 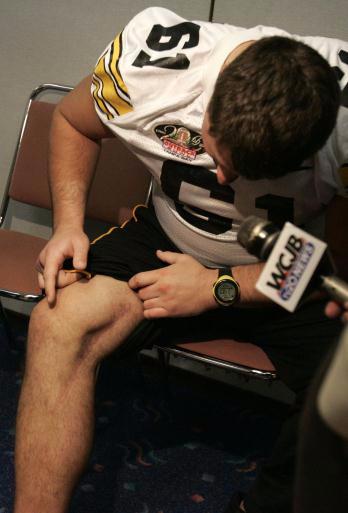 "...and this is where Satan chewed off part of my flesh. I'm pretty sure I'm haunted."

That's what's left of Brian Ferentz's right knee. Also, it's what's right about his left knee, since that was never operated on. Do you see what I did there? DO YOU?!

These are fucking golf tees. What have you done today?: Sensations of awe and inadequacy, bring thyselves forth: 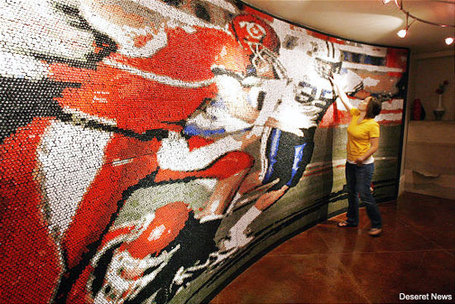 Yes, from Block U, that's a metric assload of golf tees (we're talking six figures) commemorating college football in Utah. Because when you think of great states for college football, you think... Utah (FULL DISCLOSURE: The Utes would have beaten Iowa in most of the last 5 seasons, including last year). And here you thought you were cool because you stuck enough bottle caps on your ceiling to make something that vaguely resembled a Tigerhawk with Down Syndrome.

Reason III: Because I think they're about to go 0-75,000: Storminspank posts "Why Iowa Will Be Better Than You Think" under some weird name over at Scout. Reason 2 is Matt Gatens:

He plays with a passion and drive that coaches respect and fans love. Now with a year under his belt, Gatens knows what to expect coming back for his sophomore season. You can bet that he will step up his leadership role even more this upcoming season. The fire, intensity, and aggressiveness will be there, as well as the experience of a full college season. Look for Matt to expand his role on the team both on and off the court.

Sounds great! Speaking of off the court, we'll just go ahead and remind everybody that Matt Gatens was passed over for captaincy of the team for Jarryd Cole and half-trick pony Devan Bawinkel. Just tossing that out there. Thanks, Lickliter.

Briefly... Eh, who needed 911 anyway? Certainly not Iowa City... There's Najeh, taking a shit on all the haters... The Rivalry, Esq. salutes a national chain restaurant as something that makes the Big Ten great, for some reason. Buffalo Wild Wings, guys? What, is Applebee's not close enough to campus? ... That Donnal guy we talked about yesterday confirms his commitment and that he won't bolt for Ohio State. We want to trust you, but we have to shackle you all the same. Have you ever seen Misery, Andrew? ... If you absolutely must go out, go out like this.