It's Not Plagiarism If You Link To It Gets Counterintuitive

Share All sharing options for: It's Not Plagiarism If You Link To It Gets Counterintuitive 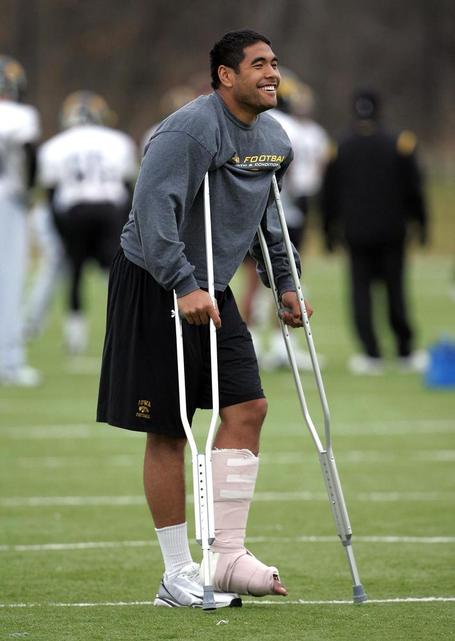 Tony Moeaki, in his natural state

Tony Moeaki Gets Interviewed, Breaks Finger.  ESPN.com Big Ten blogger features the Flyin' Hawaiian and the never-ending string of injuries and bad breaks (hur hur) that have limited his production over the past two years.  The list of injuries is staggering, both in breadth and depth:

After serving as a reserve in 2005 and 2006, Moeaki has endured a string of injuries that limited his production.

A broken hand and a dislocated elbow cut short his 2007 season four games in. He missed the following spring while recovering from wrist surgery, but hurt his left foot early in preseason camp. Another surgery followed, and Moeaki missed the first two games last fall. But the foot problem led to calf and hamstring problems, which kept Moeaki sidelined, and he also sustained a concussion.

Moeaki sat out practice after a second surgery on his foot.

"It's just been unlucky situations," Moeaki said in April, with crutches laying at his side and a boot on his foot. "None of them have been real serious injuries."

Immediately after saying that, Moeaki tripped over one of the crutches and suffered a sprained shoulder.  We joke, but (aside from maybe Dace Richardson) nobody deserves an injury-free season more than Tony Mo.  For his sake and ours, let's hope he gets it.

Some Things Never Change.  ESPN announced its football broadcast commentator pairings yesterday.  The big news (at least according to the WWL) is that Matt Millen will replace Chris Spielman as Sean McDonough's partner on ABC telecasts.  Spielman will still call games, just on ESPN with Dave Pasch.

While reading the press release, I had a brief moment of hope.  You know, that moment where all the air escapes from your chest, and you just can't believe that the words in front of you are true.  It came during this paragraph:

That list doesn't include...wait...could it be?  Could it really be that we've finally rid ourselves of Pam Ward and Ray Bent

Lincoln/Douglas Is For Jokers.  The Maize n' Brew crew debate the Iowa game.  Essentially, the Michigan perspective boils down to (1) we don't know enough about Dick Stanzi, but we're stocking up on bottled water, (2) Michigan has to run the ball effectively between the tackles if they have a chance, (3) Tim Dwight is freaking awesome.  I can't disagree with any of those, though I think Dave might be overestimating the size and enthusiasm of our readership:

No. For pure nastiness, situational awareness, and creepiness [Michigan's most difficult road venue is] Kinnick. The students know the game. They drink heavily. There's a certain, as the French say, I don't know what, about Kinnick.  It scares me.  At night.  I said it before:  "It's an 8 p.m. start. It's at Kinnick. More importantly, the BHGP will be having their tailgate."  Plus, Iowa's the best team we play on the road. That factors into it a tad.

I'd like to think we can single-handedly drive 75,000 fans into mass hysteria, but more likely it's going to be OPS and I shotgunning cans of Schlitz and mowing through bags of Ruffles.  Which reminds me, DON'T FORGET ABOUT BLACK HEART GOLD TAILGATE 10/10/09 AGAINST MICHIGAN!  BHGP!  IT'S FANTASTIC!

Footnotes.  Iowa City High quarterback A.J. Derby says he will take official visits to Iowa and Florida, despite holding scholarship offers from half of the BCS.  Don't look for a decision soon; he's taking visits during and after his senior season.  Xavier forward Jordan Crawford discusses the now-mythical dunk on Lebron.  Fifteen minutes after this interview was conducted, Crawford was abducted, thrown into a windowless conversion van, and taken to a gulag for "questioning."  What, now our schools are giving out detention slips for impersonating Michael Scott?