It's Not Plagiarism If You Link To It: June 9

Share All sharing options for: It's Not Plagiarism If You Link To It: June 9

Hickey is the first Hawkeye up tomorrow; the shot put qualifying round starts at 3:00 CST.  Coverage is available online at NCAA.com.    Friday events will be televised on CBS College Sports (DirecTV channel 613), and Saturday's finals begin at noon on CBS.

It's Gotta Be the Shoes   Solon High (and soon-to-be UI) linebacker James Morris was named MVP linebacker at the Nike football camp in Champaign this weekend.  Arguably more impressive were the accolades of ESPN.com's Brian Stumpf:

Morris is what the Nike Camp is all about - a player who has already made a college commitment but still comes out to work on his game and get better from both coaching and competition against other top prospects. The Iowa-bound LB also raised his profile outside of state lines on Saturday, showing good feet and athleticism and the straight-line speed to run with most of the 'backs in the 1-on-1s. Coachable and intense, this Hawkeye Stater has a great future in front of him.

Also winning positional MVP awards were offensive lineman Zach Fulton, who is 304 pounds as a high school junior and holds an Iowa offer, and running back Austin White, whose interest in Iowa was breathlessly reported on Rivals.com yesterday ($) despite offers from the likes of Alabama, LSU, Michigan, and Notre Dame.

He's Majoring in GRAPPLING   Brent Metcalf, who you last saw pulling a Fred Fenster on a douche rocket from North Carolina State...

...was named to the 2009 National Wrestling Coaches Association (NWCA) Division I all-academic team.  To make the team, Metcalf had to maintain a 3.2 GPA and either qualify for the NCAA Championships or win 60% of his matches.  Metcalf finished the year 37-1, and maintained a 4.0 GPA by putting each of his professors in a cross-face chicken wing and demanding perfection or death. 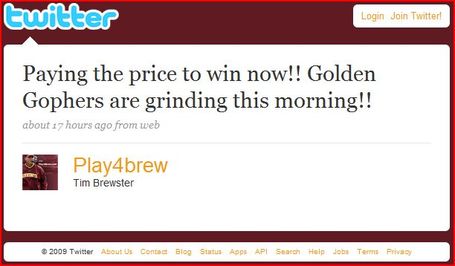 Brewster's not kidding.  All Minnesota players spent half a day in the award-winning Minnesota dentistry program, grinding their teeth into razor-sharp fangs.

In other news, Brewster saw Twilight over the weekend.

Miscellany   The Grand National Championships gives us a shoutout during their annual "reasons to love your college football team" post.  Smart Football takes down the latest attempt to use quantitative analysis on college football players.  Nick Collison gets a makeover.