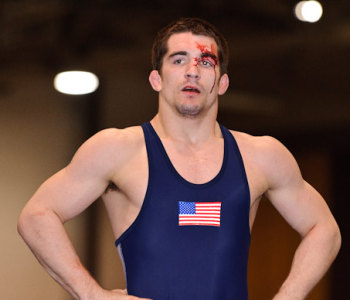 via www.intermatwrestle.com
Move over, J Leman... there's a new freedom fighter in these parts.
So Marvel is trying to cast the role of Captain America and they're supposedly looking at the predictable types: Hollywood actors (Matthew McConaughey, Mark Valley, Jensen Ackles) and pro wrestlers (John Cena - no, really).  But why do that when the right man for the job is sitting right here, underneath their noses?  Hell, if they need him to fight Batroc the Leaper, he's already got a highlight tape ready...

In other news... the 09-10 schedule was released a few weeks ago.  You can find the whole thing right here, but there are a few highlights:

* 12/06/09 @ Iowa State -- It's lost a little luster with Cael Sanderson's abrupt departure, but it's still the Cyclones and beating them never, ever gets old.  Supposedly they aren't going to curtain off part of Hilton to keep out the Iowa fans this time, but there's still five months for the Inconsolable Mr. Pollard to change his mind.

* 1/17/10 OKLAHOMA STATE -- In addition to being arguably Iowa's fiercest rival, Okie State was the last team to beat Iowa in a dual meet, back in 2008 in Carver.  The Hawks got some revenge in Stillwater last year, but next year's senior-laden team will certainly want to add a home win over the Pokes to their resume, too.  Okie State enjoyed ye olde rebuilding year last year, but they should bring a solid team (and lots of hideous orange) to Carver this year.

* 1/29/10 PENN STATE -- Almost two months after his former school gets whupped by the Hawks, Cael brings his current squad to Carver.  I'm sure the Iowa fans will give him an... enthusiastic welcome.  Sadly, Metcalf's favorite whipping boy, Bubba Jenkins, is redshirting, sparing himself another beatdown at the hands of Brent Captain America.

* 2/14/10 @ Minnesota -- The other team that can lay claim to being Iowa's fiercest rival.  Like Okie State, Minnesota enjoyed something of a down year last year between injuries, redshirts, and general inexperience, but they're too good to be down for too long.  Personally, I'll be rooting for a Valentine's Day massacre, much like the last time a major Iowa men's team went up to the Twin Cities...

* 2/19/10 OHIO STATE -- Penn State is likely a year or two away from becoming a major contender under Cael and it's unclear how long it will take Minnesota to fully rebuild; in the meantime, Ohio State may be Iowa's toughest B10 opponent this year.  They did finish second in last year's NCAAs, after all, and they have a dynamite coach in Tom Ryan.

* 3/18/10 - 3/20/10 NCAA CHAMPIONSHIPS -- The quest for Iowa's third-straight national title goes down here, in Omaha.  There should be even more Hawkeye fans than usual there, given the close proximity of our neighbors to the west.  Barring a spate of injuries, Iowa will likely be favored to get their third straight title, but there will be plenty of challenges to overcome, from both the other teams in contention and the Hawkeyes' own psyches.  They were supposed to cakewalk to this year's title, of course, but it took a massive showing in the consolation bracket to gut out the title win, so it would be unwise to start printing those Three-peat shirts just yet.