Share All sharing options for: It's Not Plagiarism If You Link To It Moonsaults Off The Top Rope

Go Tell It On The Mountain   About one year ago, the Everson/Satterfield coverup allegations went from "smoldering embers" to "towering inferno" when Sally Mason disclosed that a box of related documents (including the infamous letter from the victim's mom) were withheld from investigators pursuant to the Family Educational Rights and Privacy Act (FERPA).  Of course, the vast majority of the redacted documents had nothing to do with FERPA, which was designed to protect student's grade reports from public disclosure.  When grilled about this expansion of FERPA to redact documents not remotely within the law's scope, Mason caved:

The original thinking that federal law known as FERPA, designed to protect student privacy, prevented the letter from being shared with our Board of Regents leadership is just not tenable. There is no excuse for the failure to turn over those letter as part of the investigation that you directed the Board of Regents office to conduct in the wake of the report of the assault.

I will make it clear to all member of my administration that our obligation to maintain the privacy of student records should never be interpreted as preventing us from sharing information that you request in pursuit of your governance responsibilities.

Mason proceeded to can UI general counsel Marc Mills like he was tuna for withholding these documents, and rightfully so; the wholesale concealment of douments on FERPA grounds, just because said documents include a student's name, is incorrect, and any general counsel worth his salary would know it.

The reason we're reopening this can of hell?  Apparently Iowa isn't the only one hiding behind FERPA:

The Columbus Dispatch has done some yeoman's work in recent months examining the increasing veil of secrecy placed over the activities of ostensibly public -- and therefore FOIA-vulnerable -- athletic departments. ADs now use FERPA, a law narrowly tailored to prevent the release of student grades and transcripts, to shoot down or bowdlerize public information requests of all varieties.

MGoBrian is right.  Marc Mills' argument could very well have been "everybody else is doing it, so why can't we?"

Across the country, many major-college athletic departments keep their NCAA troubles secret behind a thick veil of black ink or Wite-Out.

Alabama.Cincinnati. Florida. Florida State. Ohio State. Oklahoma. Oregon State. Utah. They all censor information in the name of student privacy, invoking a 35-year-old federal law whose author says it has been twisted and misused by the universities.

Former U.S. Sen. James L. Buckley said it's time for Congress to rein in the Family Educational Rights and Privacy Act, which he crafted to keep academic records from public view.

A six-month Dispatch investigation found that FERPA, as it's commonly called, is a law with many conflicting interpretations. And that makes it virtually impossible to decipher what is going on inside a $5 billion college-sports world that is funded by fans, donors, alumni, television networks and, at most schools, taxpayers.

Brian goes on to discuss the NCAA's newest method of preventing document disclosure: Keeping documents that would otherwise be available to the public pursuant to a FOIA request on a secured server to prevent pubic disclosure.  By keeping them on an NCAA server, the Indianapolis-based Leviathan claims, these documents are the property of the NCAA rather than the schools, and therefore not subject to state public institution disclosure laws.  Brian's conclusion is absolutely correct:  If the NCAA wants to conduct its business under the same veil of secrecy that the NFL and MLB do, it should be paying the same taxes those leagues do.

RIP, Billy Mays   Is it wrong that this means more to me than Michael Jackson and Farrah Fawcett combined?

Caring Remains Creepy   Iowa picked up 2010 recruit #7 over the weekend, in the form of 6'5", 260 lb. Wisconsin defensive end Mike Hardy.  He turned down offers from Wisconsin, Minnesota, Nebraska, Purdue and Iowa State.  He was also the state discus champion, so he should have no trouble picking up Norm Parker's controversial "spin around with your arm extended and smack the opposing lineman until he's senseless" pass rush technique. 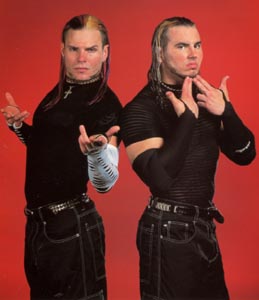 We knew Mike Hardy was disappointed in his brother's championship match DQ win over CM Punk at last night's pay-per-view, but we never imagined he'd leave the family business to pursue a career in the Big Ten.  We're glad to have him, though it remains to be seen how the Twist of Fate will translate to the football field.

As for Wisconsin losing an in-state recruit (which never used to happen), Hardy's defection could be due to the fact that nobody wants to go to their games anymore.

Footnotes   David "El Presidente" Palmer will transfer to Northern Kentucky for his senior season.  Let's hope he gets a fairer shot than he did here...Phil Steele, he of the VHT, predicts Iowa will play Alabama in the Capital One Bowl.  As you know, Phil is always correct, so order your plane tickets now and beat the rush.  If you want to start getting prepared, I suggest you start here...Chuck Long is pulling a George Costanza on San Diego State, though, to be fair, it's not really his fault.