The Real Price of Freedom

Share All sharing options for: The Real Price of Freedom 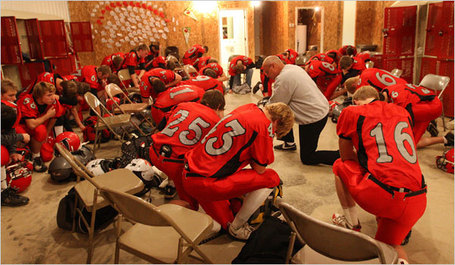 "Freedom isn't free." That's a line most commonly associated with, in order, military veterans and Team America: World Police. And as long as you equate America's foreign interests with "freedom," that statement holds up well (whose freedom, exactly, we've been fighting for post-WWII is another matter entirely, but let's not get bogged down on that right away).

As you're no doubt aware, Ed Thomas, one of the finest men in the state (either associated with athletics or otherwise) and a most worthy namesake of Ed Thomas Field, was killed when a very disturbed young man--one who probably shouldn't have been on the streets, but for a rather serious clerical error--unloaded his gun into Thomas at point blank range. All of this happened as Thomas was supervising weightlifting for at least a couple dozen of his students. Most saw it happen. And a community still trying to rebuild from tragedy has lost the one man it had come to depend on the most, even before the PF5 tornado flattened half of the town.

All of this is to say, it was one of the most horrific, senseless gun crimes in our country, not matching in scope (but certainly in brutality) the massacres at Virginia Tech or even Columbine.

And it is the real price of freedom in America.

We take many things for granted here. That's not a blanket "Americans are stupid and lazy" statement, it's an unavoidable fact whenever freedoms like ours have been an integral part of society, some of which long outdate our oldest living relatives. White Americans have never had to fight for the right to assemble, and even the vast majority of our black readership was never involved in Selma or the other protests that turned violent at the whims of police. Our country never had to endure a struggle for things the vast majority of the world would kill for, things like stringent building and electrical codes, beer, the FDA, Social Security, the Second Amendment, the rest of the Bill of Rights, free representative democracy, DirecTV, ordering pizza online, even potable running water. We would--probably rightly--laugh at a fifth-generation American adult who every day thanked his lucky stars that he can turn a faucet and drink what comes out. We probably wouldn't do the same to a recent, say, Ugandan refugee. Or Bangladeshi. Whatever; the geography isn't important, the relative poverty is.

So as we take these things for granted, it becomes easier by the day to not consider them, their advantages, and yes, their drawbacks. Take, for example, the Second Amendment, the right to bear arms. By itself, it's one of the cornerstones of American democracy and the reason why any country who decided to invade America would immediately regret setting one foot into Texas. It cannot and must not be repealed (or even significantly altered), or all holy hell breaks loose.

Also, take the First Amendment. Free speech (and all of the consequences it carries, good and bad) is essential for any democracy. So is the right to peaceably assemble. This may seem like a middle-school civics lesson, but for an example of what happens in a modern country where those rights aren't guaranteed, we'd like to point you to Iran and the current shitcyclone enveloping the country. Again, this cannot and must not be repealed (or even significantly altered), or all holy hell breaks loose.

Those two fundamental rights of our country, separately, are invaluable and indispensable and two of several reasons America became what it was and perhaps still is: the finest country in the world. The First Amendment, of course, was much more instrumental in this than the Second, though the need for a well-armed militia was much greater when the Bill of Rights was first written.

Put them together, the ability to own a gun and the ability to congregate or otherwise freely go about your life (again, it might sound weird, but this is not a universal right) about town, and there are going to be situations, ones that are so extremely rare that they're still newsworthy every time they happen, where someone who really doesn't deserve it is shot and killed by someone with a mere predilection toward violence. You cannot have the Bill of Rights and not have the possibility for this to happen. Freedom isn't free.

Yes, we have stringent laws against dangerous behavior with guns, to the point that Plaxico Burress got himself in more trouble by hiding his gun in New Jersey than by going Cheddar Bob in New York. State lines and all. But to someone with the intention of shooting another person, punishment is clearly not always an adequate deterrent. Even if the assailant's even considering the resultant prison sentence (if they're caught and convicted), it's a tradeoff many have clearly chosen to take.

We cannot stop gun violence in this country without a domestic Taliban-style crackdown, one that has no plausible chance of success whatsoever. It is the real price we pay for every advantage, the ones we hold dear and the ones we take for granted. The true cruelty of this tradeoff is that unlike our volunteer army, Ed Thomas did not choose to die for freedom. Nor, for that matter, did he die in defense of it, merely because of it.

And too often, especially after 9/11, our choices have been in favor of senses of security over these freedoms, when this is the precise time when our rights need our most vigorous defense. Let it not happen here. Let us mourn Ed Thomas as the truly wonderful, inspirational man he was. And let us not be so cowed into fear by whatever message a troubled Mark Becker wanted to send with a senseless murder that we either lose our rights or our ability and desire to exercise them.