Share All sharing options for: Assume the Position 2009: Safety 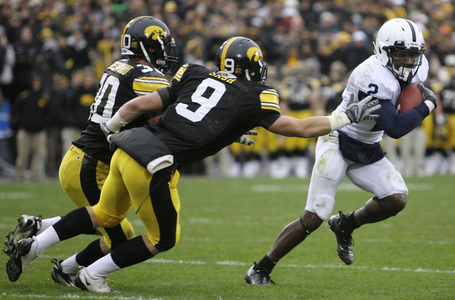 FS:  Brett Greenwood (#30, 6'0", 205, Junior) - Much like when we previewed Jake Christensen last year, let's not let the debate over Greenwood's relative quality as a safety obscure the fact that he has no challengers.

But what a debate it is.  Greenwood, a former walk-on entering his third season as starting free safety, has caused more disagreement.  Fighting out of the red corner, Marc Morehouse:

A lot of internet folk are down – way down — on Greenwood. The complaints range from bad angles to missed tackles to few big hits. I’m still throwing it out there for concrete examples. I know there are missed tackles, but I can’t think of one from Greenwood that led to a loss or a big play. I’m not saying that example isn’t out there, though. None jump out at me.

Greenwood’s first start — at Penn State in 2007 — was tough. That one stood out. He had a lot of "teaching moments" during his first season, when he made the transition from walk-on. Last season, Greenwood was one of Iowa’s most improved defenders. He finished tied for third on the team with 68 tackles last season, two picks and six pass breakups.

I’m not saying he’s an all-American, but Greenwood is a plus for Iowa’s defense, perhaps an all-Big Ten candidate next season. He didn’t make the same mistakes he made in 2007. Follow that growth, he should be a year better this season.

We can argue now. Bring specifics and, please, be respectful.

On Pitt's first and third touchdowns, both long runs snaking through the Iowa secondary, FS Brett Greenwood was caught laughably out of position. The first run was especially egregious, as one unremarkable juke move left Greenwood with two broken ankles and utterly incapable of laying even a hand on the rusher five feet in front of him. Greenwood hardly made his presence known against this first tough opponent of the season (notable exception: saving a 20+ yard run with a dive tackle on McCoy's ankles in the second half), and we're thinking the comparisons to Sean Considine and Derek Pagel can wait until Greenwood cuts down on the mental errors that were famously absent from his predecessors' play.

Then there was Indiana:

Indiana found success by attacking one member of the Iowa defense, and only one. Regular readers of BHGP know exactly who the lone weak link of the defense is: FS Brett Greenwood. Being that this is--for all intents and purposes--the same ultra-conservative Iowa defense that Norm Parker was trotting out in 2002, offensive coordinators should know exactly what to expect Iowa defenders to do on 1st and 10 or 2nd and reasonable by now.

That in mind, it's clear what quarterbacks need to do to have success passing against Iowa--find Brett Greenwood, then throw at him. INSTANT SUCCESS. Don't be fooled by Greenwood's pick in the first half--he was merely the closest player to a tipped ball. I can't recall a single good play in coverage by Greenwood all week long. Iowa has multiple strong safeties who are capable of starting. You're telling me none of them can shift over to FS? Hard to believe.

And that's not mentioning the multitude of sarcastic "Nice Tackle" comments we heard/read throughout the year.  To ask for specific instances of his ineptitude is merely asing us to select individual blades of grass from the outfield at Wrigley.

Greenwood's problem is not a lack of effort; you don't walk onto a BCS-conference program and start as a redshirt freshman unless you (1) went unnoticed because you played your high school ball in Gabon, or (2) worked your ass off.  Nobody questions his commitment.  It's just that, in Iowa's defense, a safety has to be in ideal position, tackle well, and stop the run.  Too often, Greenwood doesn't.

Morehouse makes one unquestionably valid point: If the rest of the defense wasn't as good as it was, the spotlight on Greenwood's shortcomings wouldn't have been nearly as bright.  The fact that we can spend so much time examining the shortcomings of a safety only proves the point that he was merely mediocre on a defense full of stars.

There is no real challenger to the throne, and (despite missing the spring with a shoulder injury) Greenwood will almost certainly be the starting free safety throughout 2009.  We hope this season is his Great Leap Forward.  If not, expect more of the same, both on the field and in the comment threads.

SS:  Tyler Sash (#9, 6'1", 210, Sophomore) - Tyler Sash, on the other hand, firmly entrenched himself as the designated guided missile on the Iowa defense early last season and only improved from there.  Sash, a universal 3-star recruit from Oskaloosa, finished last spring as the third-string strong safety.  He rocketed from there, earning the starting spot over senior Harold Dalton by week 2 and recording 10 tackles in week 3 against Iowa State.  After a minor step back against Pitt and a nagging injury that kept him out against Northwestern and limited him for Michigan State and Indiana, Sash became a force over the middle, destroying receivers and crashing through holes in the line.  It was Sash's interception of Daryll Clark that triggered the game-winning field goal drive.  It was his interception and return against Minnesota that set up the final score.  It was Sash's first interception against South Carolina that unleashed the tsunami.  By the end of the season, quarterbacks didn't want to throw his direction, and receivers didn't want to be in the area when their quarterbacks did.

It's not that Sash was mistake-free; he was equally responsible with Greenwood for the second touchdown against Pitt.  But where Greenwood tackled (or, too often, didn't), Sash HIT.  Where Greenwood defended, Sash jumped routes.  Greenwood was competent; Sash was dangerous.  It's why Sash plays strong safety, to be sure, but it's also why Chris Smelley made it his New Year's resolution to keep the ball as far away from him as possible.

Sash also missed spring practice with a shoulder injury, but is by all accounts good to go for the fall.  It's an understatement to say that is great news; one more year of development, and Sash has the ability to join the pantheon of Iowa safeties.

David Cato (#31, 5'11", 205, Sophomore) - Cato (Arlington, Texas; 2* Scout, 3* Rivals) was pressed into service on special teams and in spot duty as a true freshman, and responded well.  He recorded 4 tackles in mop-up time against Minnesota and forced a fumble against Illinois.

Because of Sash's injury, Cato was the de facto starter at strong safety during spring practice.  Both Phil and Norm Parker praised his performance, but he was unable to break out of the starter's shadow.  Unfortunately, because he was not redshirted, he is in Sash's graduating class, and will need something to break his way if he is to assume the top line.  In the meantime, expect more of the same from Cato this year.

Jack Swanson (#40, 5'11", 195, Freshman (RS)) - Another product of Iowa's recruiting connections in the Sunshine State, Swanson (3* Scout, 2* Rivals) used his redshirt season to add 15 pounds and grow a killer goatee.  Much like Cato, he was pushed into starting duty during spring practice because of injuries and transfers, but there is no indication he is seriously pushing Greenwood for the starting spot.  He's a classic Ferentz-era Florida recruit: Somewhat lacking in stars, but high in those other things Iowa looks for.  Swanson was first-team all-state as a senior, ran track in the spring, and was solid in the classroom (he's majoring in computer science).  Barring injuries, he'll enter the season as Greenwood's backup.

Adam Robinson (#32, 5'10", 205, Freshman (RS)) - Robinson was recruited as a halfback (he played behind Jordan Bernstine at Des Moines Lincoln) and was recruited as such.  At some point during his redshirt season, he was converted to safety and could enter the mix.  Given the position change, however, significant non-special teams playing time seems unlikely.