It's Not Plagiarism If You Link To It Requests a Continuance

Share All sharing options for: It's Not Plagiarism If You Link To It Requests a Continuance

Insert Law & Order Sound Effect Immediately After This Story   The trial in the matter of Adrian Clayborn vs. Obnoxious Honking Cabbie has been continued to January 2010, at the request of Mr. Clayborn.  This is both completely expected and unquestionably good for the football team's fortunes:

Caring Is Creepy   Iowa picked up a camp commitment this weekend from Austin Vier, a QB/ATH type from Ballard (the consolidated school district south of Ames).  Rivals, which hasn't gotten around to reviewing Vier yet, lists him at 6'7", 220.  That's the perfect build for an incoming tight end (as Morehouse speculates).

Apparently, Iowa was Vier's first offer, though he had received some interest from the usual suspects (Iowa State, Kansas State, Minnesota, etc.)  Clearly, he was planning on doing some summer traveling: 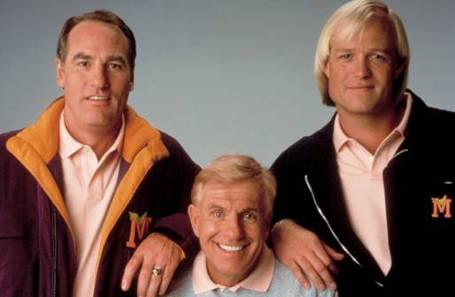 Normally, someone who was tailoring their workouts to look best at the meat markets camps and combines that consume the summers of soon-to-be high school seniors and mid-level collegiate coaches would concern me, but I feel much better when half the towns in the player's school district are named after Saved By the Bell characters.  Welcome to the fold, Austin.

Miscellany   Clay Travis says Notre Dame is losing money by staying independent; MGoBrian says not so fast.   Big Daddy Balls himself posts his legendary Father's Day diary.  They're only gone in the sense that they're writing elsewhere, but Godspeed The Realests.