It's Not Plagiarism If You Link To It: June 2

Share All sharing options for: It's Not Plagiarism If You Link To It: June 2

Let the Tailgating Begin, Part 1   Kickoff for Iowa-Iowa State has been set for 11:00, making it the first officially scheduled day game of the 2009 season.  More importantly for those of us who don't want to buy Iowa State season tickets for a chance at seeing one game, it will be televised on Fox Sports Net.  That's great news for you poor bastards who don't have the Big Ten Network.  Speaking of which...

Let the Tailgating Begin, Part 2   If you think I'm not getting up early to drink for this, you clearly haven't been reading this blog:  The BTN is replaying the 2008 Iowa-Minnesota game at 11:00 AM on Saturday, June 13.  For those of you who have conveniently forgotten the outcome, that's the game Iowa won 55-0.  I'm going to drink my weight in beer, chase it with some absinthe, watch Shonn Greene run people over, then scream, "Who hates Iowa now, bitches?" at any maroon-clad mustachioed slob who comes within 10 feet of me.  It's like November never ended.

Pissing Virtual Intensity   Loyal readers know one thing about BHGP:  We loves us the Twitter.  And, while the (Not) Christopher Walken and now-defunct (Fake) Rick Reilly Twitter feeds are a source of constant amusement, the updates from (allegedly) The Brent Metcalf might be the best thing we've ever seen from this here series of tubes:

You know what gets old? Constantly having women ask you to father their children. 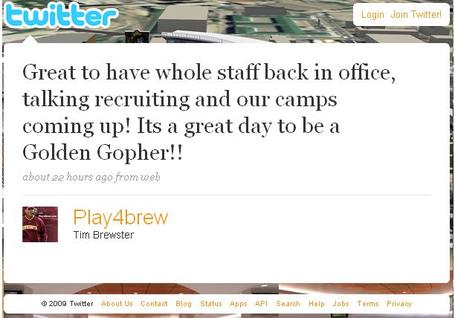 You might think Brewster forgot that apostrophe, but he's really just conserving as many of his 140 characters as he can.  You need more space for exclamation points, after all.

Etc.   Looks like Tyler Smith is leaving Knoxville for a more Mediterranean climate.  Todd Lickliter's house is for sale (and a bargain at $1.1M).  Former UM point guard Kelvin Grady, who has exhausted his basketball eligibility, joins the football team.  Wait, what are you doing reading this?  Go Get Your Basketball On!