It's Not Plagiarism If You Link To It: June 12

Share All sharing options for: It's Not Plagiarism If You Link To It: June 12

Sorry, folks.  I've been on vacation.

Just When We Thought They Were Out...   Fifteen months after being dismissed from the program - and ten months after receiving deferred judgments on possession charges - James Cleveland and Arvell Nelson are back on the police blotter:

Arrest warrants have been issued for two former University of Iowa football players who were arrested on drug charges in 2008.

According to court records, former Hawkeyes Arvell Nelson and James Cleveland did not appear for their formal in-court probation review, scheduled for June 2. Nelson and Cleveland were arrested in February 2008 after UI Department of Public Safety found Cleveland in possession of prescription drugs and Nelson in possession of marijuana in their Hillcrest Residence Hall hotel rooms.

Nelson and Cleveland have not completed terms of their probation, including paying fines, performing community service, undergoing a substance abuse evaluation and treatment and providing a clean urine sample.

In other words, they received the lightest sentence possible and, as a show of appreciation for the slap on the collective wrist, have not done one thing asked of them (a recurring pattern of behavior for Nelson).  So now they're running from the law, 100 miles from home and it's a long stretch, just like Carl Lewis, bailing the fuck out.
Tour Stop   The ESPN College Football Live tour hits Iowa this afternoon (2:30 CST), though there's no word from the Worldwide Leader as to where the broadcast will be based or who will be present.  ESPN.com is presenting their typical set of inane internet polls on football in the state of Iowa.  The obligatory Iowa State choices for "Best Coach" and "Best Team" are, in particular, a source of amusement.
Just a Reminder: It's June   There have been numerous additions to the blogosphere over the past year.  In particular, note the increase in both the number and quality of blogs written by members of the mainstream media.  We read Hlas, Morehouse, and Dochterman from the Gazette (the only paper that truly "gets" blogging).  We follow Bohnenkamp, Doxie, the DMR guys, even Harty (who, we have to admit, came up with a great blog name).  Rittenberg's Big Ten blog at ESPN.com has weaseled its way into our Google Readers.  When there's news, most of these guys get to it before we can, and they all make frequent appearances in INPIYL2I.
But it's June.  There's generally not a lot of news to report, and these guys still need to generate material.  It has led to an inprecedented amount of doldrums-filling fluff (hey, it's not as if we're immune from the problem), mostly in the form of poorly-thought-out lists and rehashings of previous postings.  Still, we also have column inches to fill, so we present This Week in Fluff:

Tim Brewster Tweet o' the Day   Tim is unusually excited about having his best player get drafted: 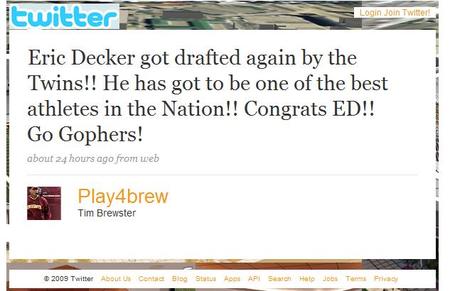 I'm not even going to attempt to determine why Brewster is congratulating erectile dysfunction.

Miscellany   The Chronotope projects Big Ten basketball players, and does not like much about Iowa.  SBN Florida State blog Tomahawk Nation becomes the latest blog to spend the summer breaking down zone blocking.  Wait, B.J. Mullens is going pro?  And this is just close enough that it might be true.