I'm About To Blow Your Mind

Share All sharing options for: I'm About To Blow Your Mind

Okay, you know how people are all down on Todd Lickliter for the poor performance of the basketball team over the last couple years? And then The Day of the Wailing and Gnashing of the Teeth? You know how people don't think he'll go down in history as a Hawkeye legend?

Our question to you is... what if he already has??

We've debated for weeks how to handle the information we've gathered but we're ready to go public with this. You'll want to sit down when you read this: Todd Lickliter is Nile Kinnick.

Evidence #1: Have you ever seen them in the same room at the same time? No, nobody has.

Evidence #2: Nile's body was never recovered. After the Rooskies shot down his F-14 over the Iowa River, crews allegedly found the airplane, but not the big guy himself. Seems a little convenient.

Evidence #3: Todd Lickliter is older now than Nile was when he vanished. Like, a lot older. I think Todd Lickliter's like 80 or something.

Evidence #4: Butler University is a fraud. How did nobody do the research on this? You don't need a degree to become a butler! Doy! I called the university and asked them how many alumni they placed into the servitude of rich people, and they hung up on me! Plus how can a butler play basketball in one of his butler tuxedos? That would be so stupid.

Evidence #5: Guess what happens when you rearrange the letters in "Legendary Kinnick Stadium." Yup. It spells Todd Lickliter.

Evidence #6: Hmm, this all seems so familiar. Remember when Nile was still playing at Iowa those few years ago? The knock on him was that he was one of the smallest, slowest players on the team, but he was very smart and ended up playing the game better than anyone else? Who does that sound like?

Evidence #7: "YOU GOT NILED!" That's reportedly Todd Lickliter's catchphrase whenever he makes a nice shot at Finkbine. Coincidence? No such thing.

Evidence #8: A picture says lots of words. Take a closer look at Kinnick accepting that trophy way back when: 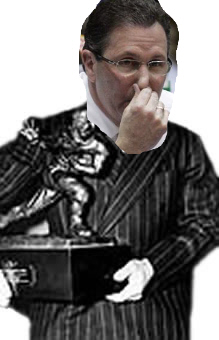 All in all, this is a bad way for Kinnick to go out. As they say, "The Nile's not just a river in Egypt!" We appreciate him wanting to do more for the school in the twilight of his life, but "Kinnickliter" just isn't cut out to be a basketball coach.

Maybe he could replace Ferentz at least. That guy sure scares me.