Share All sharing options for: 2009-10 Basketball Captains Named And They Will Piss You Right Off

After the theater of pain and horror of Exodus 2009, you'd think the basketball team could use some positive P.R., some good news. And hey, nothing says fluffy like naming your captains for the upcoming season, right? It's a way for a program to say, basically, "hey, here's some good news about our best players." 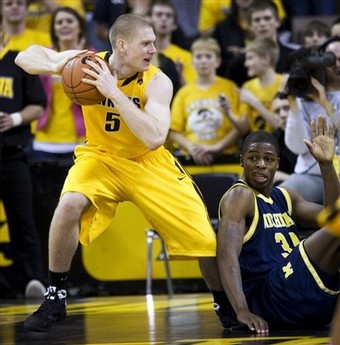 This guy's one of them, right? Right??

And speaking of best players, you'd think that there's one in particular, the guy who's now by far (and almost by default at the same time) the top returning scorer, defender, and overall player. Like, it's not even close. Surely, Shirley, he was rewarded for a fine freshman campaign by OH YOU HAVE GOT TO BE GODDAMN KIDDING ME:

Bawinkel , a 6-5 perimeter guard, played his first season at Iowa last year after transferring from Highland (Ill.) Community College. Bawinkel played in every game and started nine. He averaged 4.8 points a game and shot a team-high 139 3-pointers. All but five of his shots were 3-point attempts.

Okay, here are the thoughts that come to our mind, in descending order of composure:

1) How you don't give one captaincy to Matt Gatens is just mind-boggling. From the moment he set foot on the court all through the year, he demonstrated not only a high level of basketball IQ but a high level of hustle as well. He and Jake Kelly were the two best players on the team; now, he alone is the best player on the team. This is fact, this is indisputable.

2) Jarryd Cole's all right and he'll do better now that his knee's 95% of the way back. If Lick thought he was a good captain last season and there's no reason not to re-up, fine. P.S. Score more.

3) Matt Gatens averaged as much or more by himself in every single statistic but rebounds and 3-point attempts than those two guys did combined. Look it up.

4) Devan Bawinkel doesn't show any leadership, he just plays a one-trick-pony role moderately well. He's like if Justin Johnson couldn't dribble. If Lickliter picked him because Bawinkel only does the one thing that the coach tells him to do--jack 3s from the corner--and never deviates from that, then that makes us very upset because that is not how you encourage high-level play.

5) Remember when Lick decided to skip over Freeman for a captaincy last year? Remember how that one turned out? Does Lickliter--or anyone else--seriously want to go down that road again?

6) Why does Lickliter hate Matt Gatens?

We need to lie down for a while. Go get us a blanket and a bottle of scotch.