Let's face it, there's little that blows a coach's skirt up quite like the kind of player who can afford the team more flexibility, whether through personnel or play-calling. Here's one. 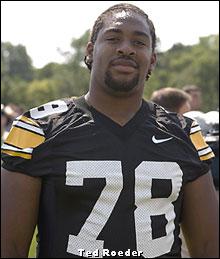 Dace Richardson: One of the weird, cool things out of spring practice is the news that Dace Richardson is not only back, but practicing with the first unit. There's only one reason why your jaw wouldn't have been on the ground when you first hear that news is if you forgot how impossibly wrecked Dace's knee was.

See, here's the deal: Dace's knee was gone. Gone, gone, gone. He hurt it about halfway through 2006, and rehab went sufficiently poorly that Ferentz even admitted at the time that if Dace wanted to play in 2007, he needed surgery to hold him over and get him through the season before the doctors could get in there and actually fix the problem with his knee.

Surprisingly, "stopgap knee surgery" wasn't a successful strategy, and after playing in four of Iowa's first six games that season, he was shelved again. That summer, he had another surgery, but this with the understanding that, well, this was probably it for Big Dace:

Iowa coach Kirk Ferentz announced that senior tackle Dace Richardson had another setback with his knee during the summer. Richardson, a highly rated recruit who was part of Iowa's stellar 2005 class, isn't expected to play again. "You always feel terrible any time someone's career has ended prematurely," Ferentz said.

Sure enough, Dace missed all of 2008, and the prospect of seeing him come back for 2009 was such an afterthought that since 2007, the QC Times had intimated five different times that Dace was done and nobody even flinched. We figured that if Dace were spending any time with the trainers, it was to A) rehab the knee and B) get his weight down to a post-football level, like 240 or so.

Keep this in mind--these surgeries weren't just putting ligaments back together; those doctors restructured his entire fucking knee. In Dace's own words:

"They took my bone and cut it and shifted it over to relieve stress on it," he said. "All the pounding I was doing  was tearing away at my cartilage. It was starting to give me some deep bone bruising and that was preventing me from playing well."

But then something weird happened: He showed up to spring practice. He moved into the 2-deep. And now, if he keeps improving, he could be the starter at left guard. That has huge implications for the left side of the line (the right, meanwhile, is Calloway at tackle and one of like 50 guys for the right. I don't get it either). Here's what it probably would have looked like without Dace:

Assuming Dace slides in at LG, here's what it is now:

So like Geary, Richardson's presence allows the coaching staff to reconsider the "best unit available." The question, then, is "would you rather have Dace Richardson or Rafael Eubanks on your offensive line?" The answer, usually arrived at in about .03 seconds, is "absolutely Dace even if his leg falls off and he gets that kind of AIDS where you catch on fire." Nothing against Eubanks as a person or anything, but he seems to be the only offensive lineman that I can remember who, absent any injury, declined in quality from his freshman to senior year. If Dace's leg holds up, this would be a substantial step up for Iowa.