The Coach's Best Friends, Part I

Share All sharing options for: The Coach's Best Friends, Part I

Let's face it, there's little that blows a coach's skirt up quite like the kind of player who can afford the team more flexibility, whether through personnel or play-calling. Here's one. 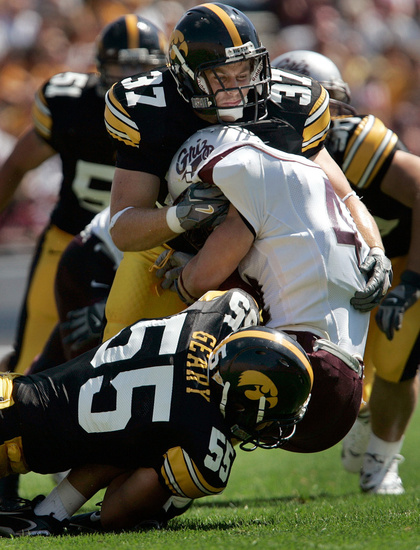 Chad Geary: Given that the staff probably (definitely) doesn't think that they've got two clear starters at defensive tackle, especially with Daniels and Klug both hovering around 260 pounds--yikes) and will want a rotation of some sort, either three or four guys, it's safe to say that they'd be happiest with one of the two 280+ lb. defensive ends shifting to the inside. At the same time, defensive end is no Murderer's Row, either; after Clayborn and Ballard, there's Broderick Binns, who's probably not at every-down status yet, and... that's about it.

That's where Chad Geary would be perfect; he spelled Clayborn for extended periods throughout the course of last year, doing such a good job that he earned the "Next Man In" award on defense in 2008.

Were Geary to line up at end, Ferentz could confidently switch Clayborn inside and establish the following rotations:

That's a lot of flexibility, especially considering that Clayborn and Ballard (and maybe even Geary or Klug) can ably play any of the four positions on the line, if need be.

Fate is a cruel, nasty bitch, however. Geary tore his ACL and is out until, in all likelihood, the middle of the season (Ferentz is relieved that it's a "clean" tear, which wins the Small Consolation Award for the week). Binns, meanwhile, seemed like less of an every-down end and more one who excels in situational play, like a slightly less athletic Ken Iwebema.

So now, Ferentz probably doesn't have the flexibility to put Clayborn on the inside full-time, meaning they absolutely must be hoping Hundertmark recovers fully from the shoulder injury that kept him out of spring practice. Otherwise, it's a constant, play-by-play juggling act of plugging Ballard and Clayborn in wherever the line needs them the most. Good for the sake of leadership and being a good teammate... not so good for getting into a rhythm and consistently exploiting matchups.

And that, people, is someone who changes a scheme. More later.