It's Not Plagiarism If You Link To It: May 28

Share All sharing options for: It's Not Plagiarism If You Link To It: May 28

INPIYL2I is your daily roundup of Iowa news, epic photoshopping, and other things you should read.  Send tips to hawkeyestatebhgp@gmail.com.

Just ask the Persians: Stay out of Greece   Despite a late-game rally, Iowa lost game 2 of its European vacation 76-75 to the Greek Select Team.  Given that the Hawks were down 27-10 after the first ten minutes, it wasn't so HOLY SHIT WE TOOK FORTY-THREE 3-POINT SHOTS?!?

You would think that, given the fact that we played well inside against the Italians and were making shots inside the arc at a 54% clip, we would focus on the interior offense.  You would think that, when you average 1.08 points per 2-point shot and  0.90 points per 3-point shot, that it would be statistically logical to pound it inside. You would be mistaken.  Keep chucking it, Tucker (4-15 from three) and Bawinkel (4-12)!

When asked for comment on the loss, leading scorer Matt Gatens said, "Man, fuck this place.  The gyros are better at George's anyway."

What do you expect when you name your stadium after the whiny guy from Friends?   Rittenberg (who is quickly finding that there are only so many Disney-friendly ideas for the offseason) ranks the toughest places to play in the Big Ten.  Kinnick Legendary Kinnick Stadium comes in fourth:

For starters, it's always packed. And arguably no stadium in the Big Ten puts the fans closer to the field than Kinnick. Throw in the color schemes -- black and gold in the stands, pink in the visitors' locker room -- and this is not a fun place to play.

Notably (and correctly), he ranks The House that Nile Built ahead of that key-jangling-geezer-infested library in Ann Arbor.  More troubling for Iowa's chances of a Big Ten championship this year, he places it behind three road opponents, including Penn State:

If every game was played at night, Beaver Stadium would get the nod for the top spot. Penn State's White-Outs are freakin' awesome and very intimidating, and the sight of the massive stadium rising from the hills is enough to make opposing players tremble.

Just a reminder:  Iowa plays Penn State September 26.  At Beaver Stadium.  At night.  Um, yeah, that could be a problem.

Stanford had some trouble with the windmill   Rain hit Toledo this afternoon, and the Hawkeye golfers were only able to finish the first half of their second round.  Iowa sits in 19th place at +20, two shots ahead of Illinois (Yeah, suck it Illini!) and only one shot back of jNWU.  With a good morning session, a top 20 finish isn't out of the question.

The story of the day was Michigan, who posted a -7 team score before darkness cut their day short, vaulting the Wolverines into second and giving UM a legitimate shot at the weekend match play finals.  Just one Big Ten school (Minnesota, 2002) has won the championships in the last 30 years.

Oh, and Tiger Woods' alma mater is in last place.

UPDATE:  Iowa finished the morning in a tie for 20th at +29.  Scores ballooned for teams who had to finish this morning; for instance, Ohio State finished at +26 for the day.  Any hopes for the weekend are effectively over, as we're 15 shots back of the top 8. 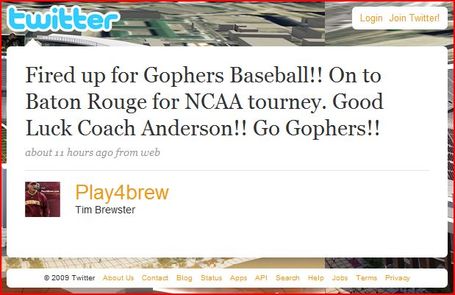 "On to Baton Rouge for NCAA tourney PERIOD," sir?  Brewster hasn't used a period in a Twitter post since May 15.  That is twenty tweets with nary a period.  In that time, he has used exclamation points in sentences about such things as:

And, the greatest of all...

Clearly, someone has a case of tournament envy...