It's Not Plagiarism If You Link To It: May 27

Share All sharing options for: It's Not Plagiarism If You Link To It: May 27

INPIYL2I is your daily roundup of Iowa news, epic photoshopping, and other things you should read.  Send tips to hawkeyestatebhgp@gmail.com.

The Hoop-a Was A-Big-a Like-a Pizza Pie-a   The Licks won the first game of their tour of Europe, Asia, and the Subcontinent 78-58 over something called Basket Ferentino.  They never trailed, and it's clearly because "Basket Ferentino" is Italian for "basketball team of quadrapalegic dwarves":

We've said a lot about Iowa hoops over the last six months, but none of it was about our strong inside game or domination of the backboards.  Tomorrow, the team tours the Vatican, where John Lickliter's ongoing hijinks might cause an international incident. 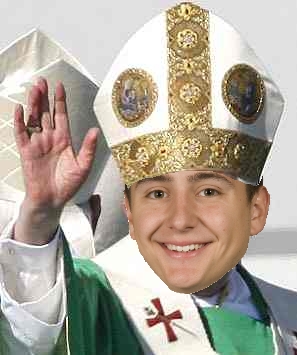 "Hey guys, check out this funny hat I got in the gift shop..."

FORE   After day one, Iowa is tied for 18th at the NCAA golf championships at +17.  That puts them ahead of the likes of #2 seed USC (who obviously ran a "pay-for-play" scheme to get Vijay Singh on their squad; lack of institutional control runs deep), Stanford, Florida, and Texas.  The exquisitely-named Vince India and sole senior Cole Peevler led the way at +3 for the first round.  The Hawks are 7 shots back of the Thursday cut.  Team leaderboard here, individual leaderboard here, and Golfweek's story on the Cinderella Hawks here.

He's the one carrying the wallet that says "Bad Mother Fucker"   Adam Rittenberg of ESPN.com continues his rundown of the top players in the conference.  At #15, we get everyone's favorite cornerback:

For the record, it's pronounced Spuh-vay, and Big Ten fans should get to know the name. If Spievey builds on a superb sophomore season this fall, he should be the Big Ten's best cornerback and one of the best in the country.

Rittenberg goes on to note that Norm Parker's already said Spievey might be the best corner he's coached.  There's really nothing more to add to that.  Well, other than WOOOOOOOOOOOOO.

No Brew tweets today, so we'll go with another from Monday.  Someone hasn't mastered the intricacies of the ENTER key... 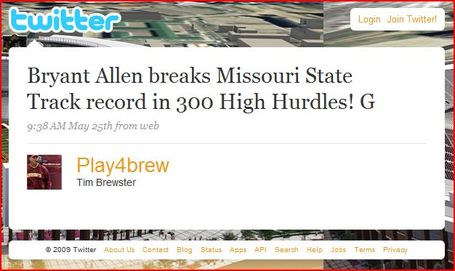 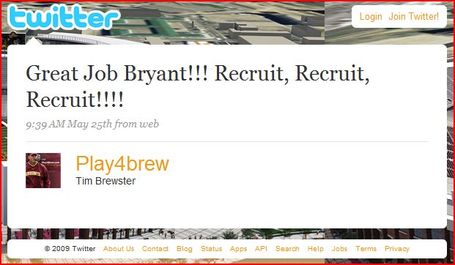 HEY GUYS THIS IS TI