It's Not Plagiarism If You Link to It: May 26

Share All sharing options for: It's Not Plagiarism If You Link to It: May 26

INPIYLTI is your daily roundup of Iowa news, epic photoshopping, and other things you should read.  Send tips to hawkeyestatebhgp@gmail.com.

Finkbine Isn't Just for Parking Anymore   I tried out for the golf team during my sophomore year at Iowa, mostly just for the free round at Finkbine.  I can honestly say it was one of the most humbling and embarrassing experiences of my life.  Despite being a decent high school player and spending my previous summer playing 18-36 holes a day, I got worked like a speed bag.

That's a long way of getting to the story:  Iowa is competing in the NCAA golf championships - starting this morning at The Inverness Club in Toledo, OH - for the first time since 1960.  They enter the tournament as the 30th seed of 30 teams.  So yeah, they're a long shot to make it to the weekend, but it's been a great season nonetheless:

However Iowa performs at nationals, it’s been an unqualified success of a season. This is a program that was ranked 152nd in the nation two years ago. Then Hankins, who was just coming off winning his second Big Ten title in seven years at Michigan State, left East Lansing to become Iowa’s coach.

With just one upperclassman — senior Cole Peevler of Keokuk — among the Hawkeyes’ top five players, Iowa had its best Big Ten finish (sixth) in eight years, then saved some of its best play for that NCAA regional in Sorrento, Fla. Sophomore Brad Hopfinger was 6-under-par in the 54 holes there, and Peevler had a 5-under 66 in the final round.

Congrats to Coach Hankins and the team.  If the NCAA puts up a scoreboard - as of Monday night, they haven't - we'll let you know.

Aninjurysayswha?   Um, when did this happen?

“[The Iowa football coaching staff] called last Wednesday and said, ‘Hey we’ve got a guy who tore his ACL and another guy … something happened,” Alvis said Thursday at the state track meet in Des Moines. “So they’re going to bring me up. So I’m happy about that.”

Alvis played his high school ball about 10 miles from my parents' house.  He comes highly recommended.  But did I miss something?  Who tore an ACL?  And I don't even want to know what "something" happened to the other guy that opened up a scholarship this late in the game.

Double Windsor, Triple Freedom   SBN's new Ohio State blog We Will Always Have Tempe (also known as WWAHT, which coincidentally is the sound I made when the Dolphins drafted Ted Ginn) pays respect to the fallen with a little Leman.

This Means BLOGWAR   Yeah, we read it.  More on it later, after we've finished the uncontrollable screaming and gnashing of teeth. 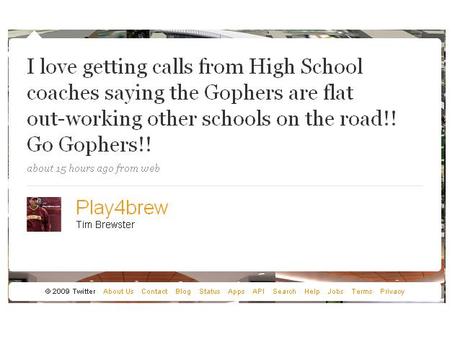 Coach, you could put the hyphen between "flat" and "out" to get "flat-out working."  You could simply combine the words "out" and "working" into what we in the English-speaking world call a compound word, resulting in "flat outworking."  You cannot put that hyphen where you put that hyphen, Coach.  You are, quite clearly, illiterate.