As you may (or, more likely, may not) have known, the Iowa men's basketball team (yep, we still have one) is off in Europe for a ten-day "working vacation" consisting of four exhibition games against European teams of dubious quality and more museums than you can shake a stick at.

First stop: Rome, where two of our key players have chosen to quit the team and enlist as Roman centurions if this pic is any indication... 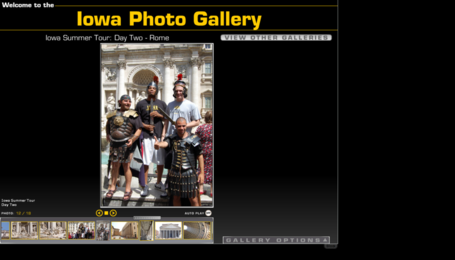 (Apologies for the crappy pic -- you can get a better look by checking out the gallery yourself.  That gallery, as well as the other galleries on this page, is worth checking out if only to see plenty of pictures of Brommer looking goofy and Cole being inexplicably popular -- that or he just loves to pose with random Italian children and tourists.)

But they're not just there to take in the sculptures and cathedrals - they also have to play a little hoops to earn their keep.  First up: mighty Basket Ferentino, who doesn't even seem to know which Iowa university they're playing.

Fortunately, the Iowa hoops team responded to that slight by drilling the filthy Italians, 78-58.  The most notable part of that story?

10-131?!  Jarryd might want to think about passing the ball a few more times.  More seriously, 15 rebounds for Fuller?  I'm not sure he even had 15 rebounds all season last year.

* Iowa scored 78 points!  In a single game!  Without overtime(s)!  I think that also probably says everything we need to know about the level of competition, sadly.

* Despite having a monster advantage on the glass (53-33) and in the paint in general (see: Cole and Fuller combining for 32 points and 27 rebounds), we were apparently still very happy to chuck up threes with reckless abandon (38 of 71 total shots, including a blistering 2-of-17 in the second half).  I understand that our offensive system is predicated around perimeter shooting, but when an obvious advantage presents itself to you, maybe you want to exploit it a bit more.  Then again, maybe that's just quibbling - a 20-point win is a 20-point win.

* Some things never change: Bawinkel takes eight shots, attempts eight three-pointers.  Good to see the Moose has been working on driving to the basket in the offseason.

* Only 5 for 13 from the free throw stripe, which would be more concerning if five of the misses weren't from Iowa's resident bricklayers, Cole and Brommer.  Although only getting 13 FT attempts is a little depressing.  Did our guards even try to drive to the basket?