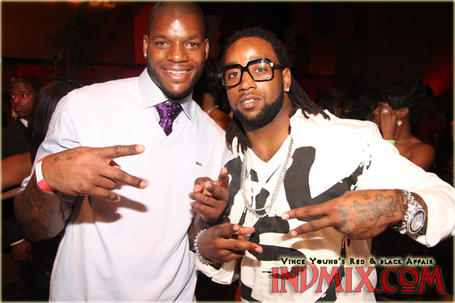 That's Cowboys tight end Martellus Bennett--more on that nutball in a quick second--and former Iowa CB Charles Godfrey at a recent party hosted by Vince Young. Those are details you're not required to know or care about. They're posing together and throwing up signs, in all likelihood, because they're both Houston-area natives and probably knew each other growing up. Because everyone in a large metropolis knows everyone else, y'know.

But damn, Charles Godfrey... what the hell are you wearing? You look like what would happen if Kanye West fucked Lil Wayne. That whole outfit is so... oh god, he's right behind me, isn't he. I'll shut up.

And then Martellus Bennett, a.k.a. Marty B. He might be the most insane member of the NFL. Not like an insanely good player or insanely intense and hits really hard. I mean legitimately batcakes. Here's a quick rundown:

So at the very least, though Godfrey looks ridiculous, at least we know he keeps good company.