I took two years of high school Spanish.  Our teacher smoked three packs of Virginia Slims a day (you could get a nicotine buzz just from smelling your graded homework) and had long since stopped caring about whether her students actually learned anything.  One enterprising upperclassman who should be inducted to the Hall of Awesome taped Tommy Boy off HBO Espanol and brought it to class.  We watched it every day for an entire semester.  When I visit Mexico, I tell everyone I'm checking the specs on the inline for the rotary girder...I'm retarded.

Just wait until he gets around to painting Seth Gorney  Over at EDSBS, full-time basement inhabiter superstar blogger Oops Pow Surprise answers a poor student's Craigslist Etsy.com request for Joe Biden fan fiction an artistic rendering of the Daniel Murray game-winner.  I will never tire of using strikethrough jokes referencing that play as often as possible.

You can't spell "Waking up in a pool of your own urine and vomit" without BHGP  Mark your calendars.  Hide the children.  Alert the authorities...The First Annual Black Heart Gold Tailgate is officially scheduled for October 10, 2009.  That's a night game.  Against Michigan.  Every news story about that weekend will end with the reporter slowly removing his glasses and somberly saying, "There were no survivors."  More details as the date approaches, but get ready to unleash hell.

NEW SHIRT NEW SHIRT HOLY CRAP NEW SHIRT  We're still waiting to hear if Bloodpunch is going to adopt our proposed Kinnick Stadium redesign, but capitalism waits for no man.  The GO IOWA AWESOME logo at midfield is quickly usurping the tiger hawk as the symbol of choice for Hawkeye fans, and now you can wear it all the time! 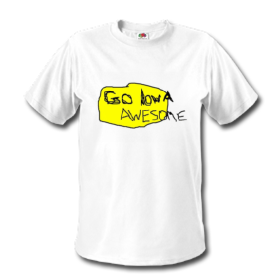 Not Norm Parker ages in reverse  Not Kirk Ferentz has been on the recruiting trail most of this week, but has returned today from hunting for one-armed quarterbacks and high school safeties that Chris Doyle will inevitably convert into defensive tackles to discuss Bizzaro Ken O'Keefe and other things.