Keeping my end of the bargain

Share All sharing options for: Keeping my end of the bargain

So if you remember from awhile back I had a little problem with a deadbeat friend in our NCAA basketball tournament and I asked for help from a bunch of totally random, intensely smelly, mildly demented, possibly deformed, almost certainly drug-addicted strangers known as "BHGP readers."

There were a few minor problems.  Let's go with bullet points, shall we?

Therefore, I'm doing the only thing a sensible person in my position would do:  All three.

So, I don't know how much you all know about "star-naming," but let's just say it's a complete and utter crock of shit.  The International Astronomical Union is the only outfit which can name a cellestial body......and they don't call them "Tim Brewster eats my shit."  They use numbers.  These sites that charge you to name a star are selling you a $50 certificate that's celebrating the fact that your name has been entered into their database.  And yes, I realize that it would have been funny if I used his victory money to purchase such a bullshit gift....

What?  That's what you got your girlfriend for your 1 year anniversary?  Well, not only is that the world's shittiest gift, you could have gotten it for free.

Name hidden to protect the "innocent"

If you don't want to see photos of the pubecheck, stop reading here.

Still with me?  Good.  You're a disgusting human being.

Ok, so instead of splitting the payment into like 25 checks, I decided to do just two.  I assumed that if the checks were too small, he wouldn't bother cashing them.  I figured that the threshold must be about $50, so I made each one out for $52.50.  For the first one I used Elmer's a generic glue that looks like Elmer's and put a thin layer all over the check and sprinkled the goodies on it and pressed them down with a bible I found under my sink. 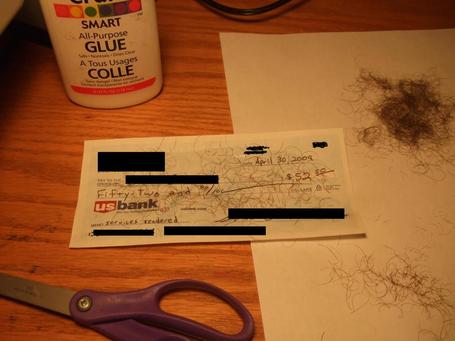 For the second check, I doubled the hairs and used thick transparent moving tape for adherence.  Also, I post-dated it a month.  My hope is that he decides to take them both in at once and they tell him he has to come back in 3 weeks to cash the second one. 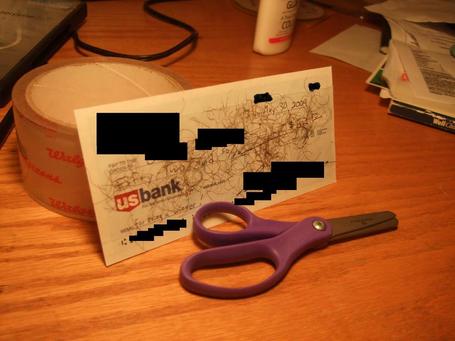 Big shout out to the United States Postal Service for helping me out with this.  Neither snow nor rain nor letters filled with pubic hair keeps them from completion of their appointed rounds.

The end, I guess.  Sorry for not having anything truly Hawkeye-related to report.  Next time, though, I swear.......