We'll get to the draft in a quick second -- WTF Mitch King -- but we just saw this picture and it's pretty awesome: 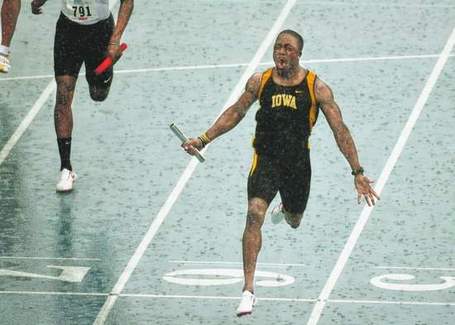 That's WR Paul Chaney doing something that must be pretty sweet: anchoring the 4 x 100 team to victory in the middle of a downpour at the Drake Relays here in Des Moines.

The rain has been no joke here this weekend-- we're talking about, like, 4 inches and counting (small penis joke goes here)--so it's not like they could have planned around the rain or anything. Or wait, they don't normally have track events in the middle of a downpour, right? Is it like baseball, or what's the deal with that?

Chaney also had this to say about the race:

Chaney was asked after Saturday's rain-soaked race what he prefers between running track and playing football.

"Today, it would probably be anchoring that," said Chaney, who plays receiver for the Iowa football team. "We play football in the rain like that, so it was nothing new to me."

Let's see, out of the two-deeps in football, or anchorman on a team that wins in the relays? Not a tough call.

At the same time, maybe we shouldn't be so dismissive of his prospects on the gridiron. It's pretty obvious that he's spent three years with Chris Doyle, so who knows? Maybe he's got a niche role waiting for him as a zone-stretcher out of the slot over the next couple years. He doesn't look undersized anymore, anyway.