We'll have much, much more on the invitation-only non-Spring Game later tonight (initial reports are not good).  For now, mad props to BHGPal Mike Hlas, who took this picture while stalking players' parents during the scrimmage*: 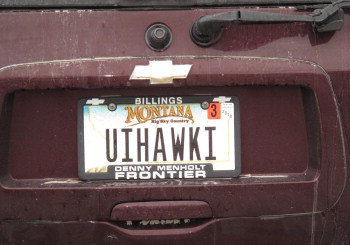 That's right, folks: It's the tailgate of the Chevy Blazer used to transport Casey McMillan.  We say "transport" because, technically, Casey Mac rides in an electrically-charged 12-foot cage hitched to the back, while his handlers sit in the backseat, tranquilizer guns always at the ready.  Fortunately, they have only had to use them once, when he climbed a tree in Missoula.

McMillan's parents are clearly humble.  If our offspring killed grizzly bears with his hands and could peel the roof off our SUV like a pop-top of Chunky Soup, we'd have a far more descriptive custom plate:

Any other ideas?  Montana license plate generator here, comments below.

* -- Actually, we've been laughing at the visual of Hlas walking around the parking lot, taking pictures of license plates like the FBI agents at the Corleone wedding at the beginning of The Godfather, only to have his camera destroyed by an angry, drunk Ken O'Keefe.  Unfortunately, there aren't any good shots of that on Google Images for us to photoshop.  Bastards.