The Case For Matt Gatens

Share All sharing options for: The Case For Matt Gatens

According to HawkMania, the Big Ten will be handing out its postseason awards tonight. We expect Jake Kelly to be on the 2nd team after the last three weeks, and if that doesn't happen there'll be hell to pay.

But let's talk about the other accolade at stake, which is Big Ten Freshman of the Year. There are two main candidates in play here: OSU's William Buford and Gatens. There are some tertiary characters as well--OSU's BJ Mullens, Indiana's Tom Pritchard, MSU's Delvon Roe, but they're probably not getting much other than a few third place votes from homers. This stuff happens.

And let's be clear: Buford's pretty damn good. He kind of reminds us of Ricky Davis at this stage in the game, but a little less athletic and with a better outside shot. He's an effective scorer who can go to the NBA whenever he feels like it, basically.

But at the same time, while OSU would still be pretty good without Buford, Iowa may not have won a game in the BXI without Matt Gatens. 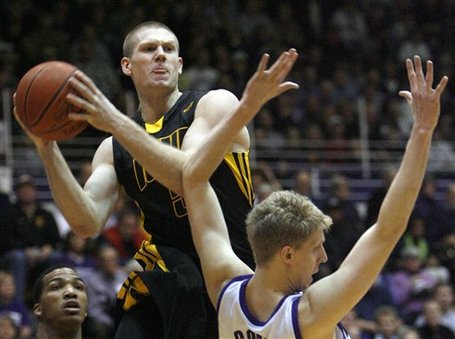 Fact: Gatens is 8 and a half feet tall.

First, the intangibles. Gatens was the smartest player on the court at all times for Iowa, and he could capably D up any of the first four positions. He's every bit as good a shooter as anyone else on the team; had Lickliter instructed him to stand in the corner and just wait for the ball so he could jack up 3s (not to name any names), he probably would have managed a higher shooting percentage than Bawinkel (okay, we named names).

The offense just plain ran better with Gatens involved. He rarely, if ever, picked up a dribble at an inopportune time, threw a lazy pass, or dribbled a hole in the court while the shot clock ran out. We're not saying those are things that Buford did, but we are saying that those are things that everyone else on the entire Iowa team did.

Most importantly, when it comes down to the numbers, Gatens was just better. Observe:

Yes, both led in six categories. The difference is that of the six, Buford is only clearly better in one, steals, and not a standout by any stretch there. Meanwhile, Buford's only within sniffing distance of one of Gatens' superior qualities (two if you're feeling generous about 3-point percentage).

Again, we're taking nothing away from Buford, who is a fine player in his own right and who will probably have a more productive NBA career when it's all said and done. Probably.

But it sure seems like giving the trophy to Buford will be most largely a reflection of Ohio State's record compared to the Hawkeyes, and that's the most unfair metric of them all. Ohio State was never fighting not to implode under the weight of all the injuries and absences that befell the team, nor did Ohio State need to lean on Buford from Day 1.

8'7" Gatens makes a block without jumping.

And look, we understand that from a semantical standpoint, the name of the award is "Freshman of the Year" and not "Most Valuable Freshman," so a voter would have the option to foresake whatever larger team context he saw fit. That's fine. But these guys didn't play in vacuums--they're much too tall to fit in a Shopvac, we checked--and to determine that Buford was better requires a substantial and obvious amount of shortsightedness and cherry-picking, and that makes picking Buford over Gatens a bad choice.

[UPDATE: It looks like while we were fighting with tech issues, the awards were released, and Gatens, in fact, didn't win FOTY. Further, Kelly didn't even make 3rd team, which is a silly fucking joke. Yes, Iowa went 5-13, but Kelly and Gatens weren't to blame. Way to go, guys.]