Share All sharing options for: REMARCHIFORNICATION BRACKET MADNESS ROUND 1: SECRETARY VS. JOE TILLER

Oh, what is it now? I'm trying to talk to

SECRETARY, DID YOU HEAR THE NEWS THAT THAT IRISH FOOL BOWDEN WILL HAVE TO GIVE ME ALL HIS WINS

That's not what the NCAA ruled. He has to vacate a few wins, like 14.

SECRETARY, BRING ME A NYQUIL GIMLET THIS INSTANT AND YOU'VE GOT THE REST OF THE DAY OFF 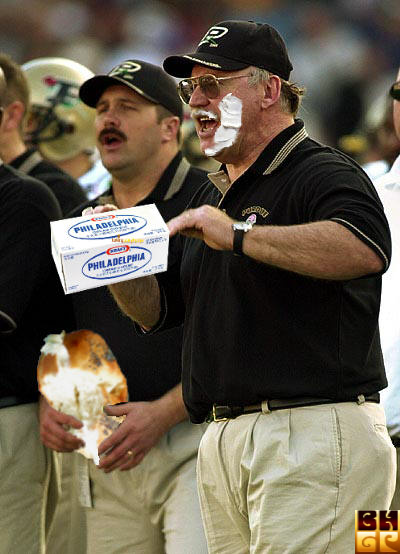 Aw, shucks. Hi, everyone. It's just an honor to be here in your tournament. Never thought a guy from Wyoming could make it to the BHGP big time. It's such an honor. Gosh, it's like... well, can I tell you a story, folks? I figure I might as well. My first year at Wyoming, we just won a big ol' game against Colorado State, and a young lady from Cheyenne 5 News comes up and asks me how it felt to win a game like that. Well, heck, I didn't know what to say, so I tell her, "It's like having a Philly Cream Cheese sandwich for breakfast, it's great!" I was just blurtin' out words! Well next thing you know, 3 weeks later, I get a package that they refrigerate with the dried ice on my doorstep, and it's a thank you note from Philadelphia Cream Cheese for name-dropping them on live TV! There must've been 10 packages in there! Made my day, I'll tell you that. And ever since then, seven days a week, it's me and that cream cheese, and it's so good, so good. Makes me feel like a young man, the way it slides down my throat, like it was just meant to be there. I don't much care for them new types they got with the flavors mixed in, and my wife's trying to get me on the "whipped" kind, 'cause it's "lighter." Whipped? I see what she's trying to do. Ol' Joe doesn't get whipped by no woman, not when the cream cheese is at stake here. Then sometimes we go down to the bagel place and there's that little Mexican or 'spanic or somethin' girl behind the counter, and I get my bagel and cream cheese, and I know it's not Philly, but I'm willing to substitute in a pinch, y'know. Then the ball and chain gets mad when I tell the little senorita "I like the way you spread it" when she's makin' my bagel. Tells me I'm a pervert. I'M JUST TALKIN' BOUT THE CREAM CHEESE. She say's I'm makin' Lupe all uncomfortable, and it's like, WOMAN, let me enjoy my damn bagel in silence for once, and then MAYBE I wouldn't be compelled to fill a mixing bowl with it every night then jam my face in and scream and cry. I WANT TO MARRY THE CREAM CHEESE. LET ME DO THIS AND I CAN FINALLY BE HAPPY.