Time to take a step away from the bloodbath that is JoePa vs. the Chinese Security Guards. Vote anyway, if you haven't already. But there's a question bugging me, and since it's Remarchifornication and all, I'll share it with you folks.

The NBA fans among you may recall that Allen Iverson recently cut his trademark cornrows, citing a need for change, Obama's presidency, and the request of his family. Seriously, that's not a joke:

Is it time to switch back to briefs?

I mean look. I'm 27. My free-wheeling boxer days with their polka dots and their hearts Hello Kitties GUNS AND SHIT stripes had a good run. But Obama's the president now, so it's all about change. That means, to me, to dress like a grown-ass man.

So we decided to plug all the data into the BHGP COMPUTOTRON 2000 and get an accurate representation of "OPS in tighty whiteys." Your answer: 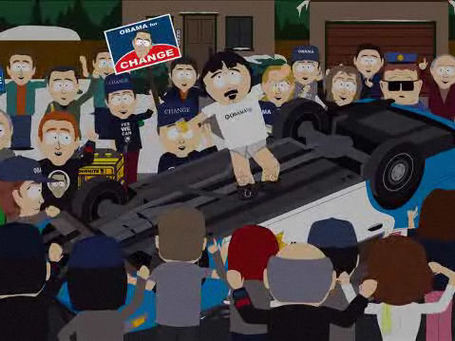 What do you folks think? Is it time to CELEBRATE GOOD OBAMA COME AWWN in my BVDs from now on?