Kinnick Stadium Getting A Brazilian?

Share All sharing options for: Kinnick Stadium Getting A Brazilian?

All right, friends; we back like Podolak. Thanks for all your tech help. It was completely ignored.

There are certain things I want in life. Actually, "want" is the wrong word. There are certain things that I desperately crave even though I know I can't have them. They include but are not limited to Barack Obama's new ride (but with lasers), a robot that knows kung fu and how to make a decent steak, and a painted water tower.

And while the water tower's never going to happen as long as the UIHC dwarfs Kinnick in terms of incoming money (it's true, by the way), it'd be nice to have the 50-yard-line painted. As it's been explained to me, the triple threat of cold winters, heavy fall foot traffic, and a fresh coat of paint would be too much for any strain of grass.* So if the grass is what's holding them back... well, not anymore:

The UI indicates in documents provided to the Board that were made available to the media earlier today that the drainage system for the playing surface installed at Kinnick prior to the 1989 season is not operating properly, needs repair and will need to be replaced. The documents also note that the storm water drainage systems that serve the upper portions of the facilities' east and west grandstands also are in need of repair.

"Our staff has been looking at alternatives and options the past couple years as the drainage in Kinnick has grown progressively worse. It reached a point of critical concern this year prior to our game against Iowa State. We brought in engineers to conduct additional studies and realized our only option is to replace the drainage system that is now 20 years old," said Gary Barta, the UI's director of athletics.

The current playing field - Prescription Athletic Turf installed during the 2005 season - would be removed during the repair or replacement of the drainage system. Kinnick has featured a grass playing surface since the 1989 season. It had an artificial surface from 1972 through 1988.

Yes, they're ripping all the grass off at Kinnick, it looks like. That ISU game was an unmitigated disaster in terms of footing, but that one game aside, I wonder if there isn't some exaggeration afoot here. Iowa had some clogged drains, primarily away from the center of the field, but by and large the sod held up well over the course of the year; it's not like we saw guys falling all over the place at the Purdue game (unless they had tried to tackle Shonn Greene, of course**) in November.

As Morehouse pointed out (and his commenters summarily questioned), Gary Barta claimed the replacement would save $80,000 a year in operating costs. That means the move will pay for itself in roughly never, but it's also fair to assume that the UI athletic department never ever ever wants another Iowa-ISU type of game in the slop again. Ever. 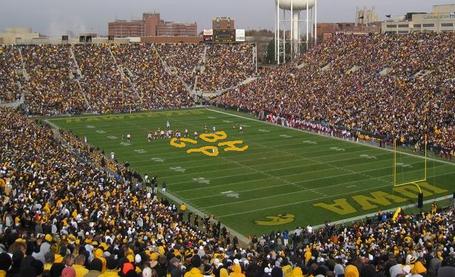 *But then again, when I "played" football at a nearby D-III school, we had a painted logo at midfield. The field wasn't that great though. This aside has contributed nothing.
**You'll want to watch that one in HD. It's that much more glorious.