Ken O'Keefe Looking Forward to Getting His GPK On

Share All sharing options for: Ken O'Keefe Looking Forward to Getting His GPK On

So I just read about Ferentz's new contract and thought that a good friend of mine, fresh off a 16-hour Cartoon Network marathon, would be interested to hear the news. You would think that a member of the coaching staff would know the deal, but his relationship with the other coaches has been a little strained since an ugly incident prior to the Outback Bowl.

Hey Ken, did you hear Kirk got a 7 year extension?

What? No, I just figured out Blues Clues. What'd you say?

Kirk got a 7 year contract extension worth close to 3 million a year.

You mean like......dollars?  What the shit?   He told me we he was getting paid in Garbage Pail Kids like me.

Seriously Ken, I think you should...

Ken listen to me. This is important.

According to the article....

.....it says that "his assistant coaches will be able to receive additional compensation if they meet certain goals."

You're an assistant coach.

Oh for fuck sake....if the team does well, you could get more money.

No problem, we held opponents to like 12 points per game last year.

You can say that again.

You don't coach the defense, Ken.

Oh. Right. The other guy does that.

If he's the fat guy that gave me a swirley after the Michigan State game, then yeah. Him.

You're not going to get paid for what Norm does.

Language, Ken. Listen, just do what you're supposed to do next year and you'll be fine.

Come on, you know this.

Getting closer.  Expand on that.

Atta boy!  And if you do that, you're going to make some REAL money....and I think you know what that means. 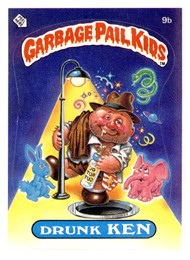