Share All sharing options for: So Who's Drafting Shonn Greene, Anyway? : AFC North

In the AFC East, we identified only one team who would be interested in drafting Greene on Day 1: New England. Now we move to the AFC North, a.k.a. EVERYBODY SHITS ON OHIO.

The Ravens? Probably not. Willis McGahee hasn't put together a great season since 2005, but he's under contract through 2013. By the way, we guarantee that he gets released by the end of 2010. LeRon McClain is pretty well set in as the short-yardage change of pace; at 255 pounds, he's your short yardage man, bar none.

Oh, and if you're wondering what happens if Baltimore dumps McGahee and his contract (they will), Rutgers' Ray Rice is working his way into the lineup already. So even if Baltimore dumps their top two tailbacks, they're committed to Rice, which means there's really no room for Greene there. Considering the rising age of their defense (and by that I mean Ray Lewis) and a questionable offensive line, there is not a damn chance Greene goes to Baltimore before Round 670.

This is a popular pick, for a variety of reasons. The National Football Post thinks this is Shonn Greene's destination with the 38th overall pick.

The Bungles currently boast Cedric Benson, Chris Perry, and Kenny Watson at tailback. None of them are very good, even though Benson and Perry were both first-round picks (way to go on that one, Bears). 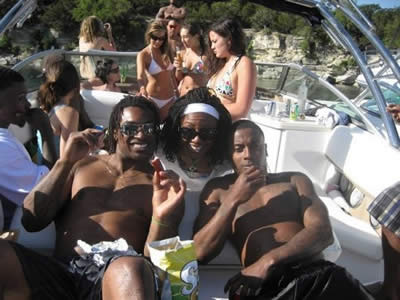 This did not end well.

This pick does make sense. Cincy needs to get a high-level, contribute-right-away talent with their first pick. Any of the top 9 picks in the NFP's draft fit that bill and fill Bengal needs, and Cincy holds the #6 pick. So when the 2nd rolls around, will Wells, Moreno, and McCoy all be off the board at that point (we doubt Ringer stays above Greene by the time the draft rolls around)? If they are, look for Greene to be wearing the Failstripes in 2009. Damn it.

On one hand, there's Jamal Lewis and the 7th best starting jNW tailback of the last 7 starting tailbacks for jNW. Lewis is a force, but the whole age, workload, and "spent two years in prison while rehabbing an ankle" thing tends to add up. So you know who we'd like to see here? Knowshon Moreno. Or Donald Brown.

Both are juniors who would serve perfectly as an understudy and third down back to Lewis before they step into a lead role. If a defense is able to clog the 1 and 2 gaps and shut down Lewis, after all, why bring in a guy like Greene who'll have a similar skill set? You'd want to test the edges with a smaller guy. Also, there's a chance of getting, say, Ringer in the 3rd round instead, and the Steamers need as much top defensive talent as they can get.

Oh, now this would be fun, wouldn't it? Greene back in the black and gold, kind of a new Jerome Bettis, on a team that struggles with short yardage running, and chances for rings every season he's in town? Sounds great.

And I totally can't see it. Completely wrong move to make for the Steelers.

First of all, the problems in Pittsburgh weren't (only) because a gust of wind can take down Willie Parker. That line was abysmal. It cost Pittsburgh probably dozens of points over the course of the season by ending drives on 4th and 1 or by forcing chip shot field goals instead of finishing a drive properly. In fact, if the Steelers didn't have the hardest QB to sack in their pocket, they lose the Super Bowl (if they even make it in the first place).

Then add in the fact that the Steelers just used a 1st round pick on Rashard Mendenhall last season, and this is plainly a roster that doesn't have any room for Greene. Shame, really, especially when they could give this a proper update, and Shonn just flattens the kid for making eye contact without asking:

Up next: Will Shonn Greene get drafted by aliens????