Share All sharing options for: It's Not Plagiarism If You Link To It Welcomes Our New Mid-Major Overlords

INPIYL2I is the BHGP daily roundup of news, gossip, and good stuff from Blogfrica.  Send your tips to hawkeyestatebhgp@gmail.com.

That Smells Like Pure Gasoline.  Iowa basketball (3-5) travels to Cedar Falls tonight to take on in-state basketball Jedi masters UNI (5-1) in the first game of three straight against in-state opposition.  Northern Iowa comes in after pwning Greg McDermott and Iowa State (again).  Iowa is trying to follow up its best performance of the season, albeit against Prairie View A&M.  I honestly don't even remember last year's game; fortunately, the Panthers are there to remind me:

Included in that run was last year's 65-46 Hawkeye triumph during which Iowa limited UNI to just 40 field-goal attempts - the Panthers' fewest in non-conference play.

It would appear the "IOWA" written across the Hawkeyes' jerseys still puts the Panthers on edge. UNI will try to alter that perception Tuesday night at 7:05 p.m., when it hosts Iowa at the McLeod Center.

"The state of Iowa really plays it up. It means a lot when we go head-to-head," said UNI guard Ali Farokhmanesh, who prepped at Iowa City West. Last year, Farokhmanesh added, "everybody on the team was pretty frustrated with the (Iowa) loss - we just didn't play like ourselves."

Iowa has won the last two games in the series and three of the last five, which sounds good until you realize that Northern Iowa hasn't won a football contest against Iowa in more than a century and, while UNI has slowly become one of the premiere programs in the Missouri Valley Conference, it's still the Missouri Valley Conference.  Nevertheless, UNI has already dispatched the Cyclones and Boston College this season; Iowa's just another brick in the wall.

Coach Lickliter, who was hospitalized for approaching perfection severe headaches late last week, is scheduled to be released from University Hospitals today but is not likely to be in attendance. Assistant coach Chad Walthall will again assume the head coach's chair in his absence.  Walthall was formerly head coach at Loras College, so this is basically a lateral move.

Good luck seeing the game: Something called the Panther Sports Network (Their slogan: "60% of the time, we work every time") is responsible for tonight's broadcast.  KWWL, which would normally broadcast the game, would rather show fat people working out, so unless you get the KWWL digital alternate or Mediacom Connections, you're left to the dulcet tones of Gary Dolphin and Bobby Hansen.  Given that fact (and that we're recording the podcast tonight), a liveblog is doubtful.

I'm not here to whine on behalf of the Iowa team, but rather to say that Wulff and Harbaugh should be ashamed and embarrassed for picking Orange Bowl-bound Iowa so low. I've never been a fan of the coaches poll because you don't know who does the voting each week. All we do know is that somebody associated with Stanford voted Iowa 16th, and I can't imagine it being Stanford athletics director Bob Bowlsby.

If Harbaugh did vote Iowa 16th, you wonder what his motives were. Maybe he is still bitter over Michigan's 12-10 loss to Iowa in 1985 when he was the starting quarterback for Michigan or maybe he just doesn't like Iowa. Whatever the case, Harbaugh and Wulff did nothing to help the credibility of the coaches poll.

The problem is, Harbaugh's vote clearly is less about Rob Houghtlin and more about his current conference: He ranks his own Stanford Cardinal an absurd 12th, Oregon State 13th, and Arizona 14th (by the way, Stanford lost to both of those teams).  That leaves little room for actual sanity.  The indignation would be warranted, of course, except for the fact that Big Ten coaches practice the same kind of abject homerism; Tressel ranked Wisconsin 15th, Bill Lynch put the Badgers at #16 and found room for jNWU, and Zook and Dantonio found room for Wisky in the top 20.  Pat may want things so democratic and cool, but forgets there's no guidance when random rules.  We just rely on the sheer number of coaches to limit the effectiveness of the outliers; it's not very good at that, but it's all we have.

Caring is Creepy.  No, Seriously, TDG?  It's Getting Really Creepy.  Minnesota high school offensive lineman (and we don't mean that in a derogatory sense), national 5-star prospect, and Daily Gopher fetish object Seantrel Henderson has narrowed his list of potential schools to eight.  Iowa is one of those eight schools.  TDG doesn't understand this development:

Iowa - this is the surprise new-comer to the Seantrel Sweepstakes. Iowa received an unofficial visit for the Gopher game. Who knows how serious this visit is, maybe they are just doing their due diligence. OR maybe Ferentz has convinced the Henderson's that he's the one player missing to take them to a BCS game next year. Who knows, all I know is that I might cry if he goes to the Hawkeyes. I can understand leaving for USC, Florida, Notre Dame, Oklahoma, Ohio State; but Iowa? No doubt they are much more successful than the Gophers in recent years but it's not like they are perennial anything except a good second tier B10 team. I digress.

It could be that Seantrel wants to stay close to home, but would rather play for a former NFL offensive line coach who worked with players like Jonathan Ogden in the pros and Steinbach, Gallery, Nelson, and Yanda at the college level.  Or it could be that he's worried Tim Brewster will try to convert him into a cornerback.  Either way, your tears taste like chicken fried steak.

i am in a glass box of emotion  southern cal coach pete carroll is clearly too distraught over his team's emerald bowl trip, or his recent feud with charlie weis, to find the shift key and throw in his usual mix of capital letters and exclamation points on yesterday's twitter update 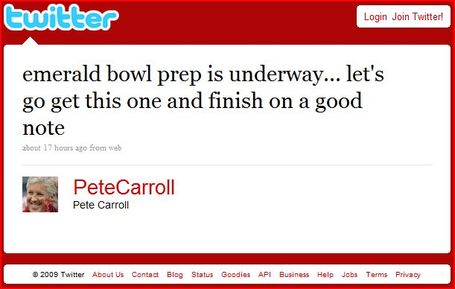 it's going to be ok, pete.  the sun will rise tomorrow at your house in malibu and OMG YOU'RE PLAYING IN THE NUT BOWL LOL