Hey Jealousy: How This Season Created a New Iowa Fan, Who Then Immediately Trumped Me

Share All sharing options for: Hey Jealousy: How This Season Created a New Iowa Fan, Who Then Immediately Trumped Me

I am not just a fan and chronicler of Iowa athletics.  No, much like the Apostles or missionaries or Scientologists of yesteryear, I believe it is my solemn duty to convert as many people to the cause as possible.  Fandom is a communal experience, after all, and that community should be as big as possible.

My latest target for conversion was my friend Lauren, a bartender at one of my favorite local establishments.  This was no easy task, mind you: Not only is she not an Iowa alum, but she has never been a fan of any sports franchise and likely wouldn't know a football if it hit her between the numbers.  Despite growing up in St. Louis, she had little interest in baseball and even less in football.

I took a cue from the Jehova's Witnesses who routinely show up at my door1 and started innocuously.  Last winter, I'd ask her to watch basketball games; she looked on in detached bemusement as I suffered, repeatedly asking why she should agree to become a fan of something that brought me so much pain (a valid question, mind you).  I told her about the good times, like that one November night during my salad days in Iowa City, when an upstart group of Hawkeyes knocked off #1 UConn, and I spent the evening running through the ped mall singing "In Heaven There Is No Beer."  It was then that I issued a warning: If you think this is the definition of insanity, just wait until football season.

I saw her after having screamed myself hoarse during the Penn State game, drunk on victory and cheap pitchers of beer.  She shook her head at the triviality of the contest and the ridiculous effect it had.  She was bewildered by the roller coaster of emotions that accompanied the Indiana game ("Why did you keep saying we were going to lose? We are ahead by 11.  Isn't that good?")  She was occasionally watching -- this was a big step forward -- but the season was flying by; something had to happen, and soon.

We took a short road trip in the immediate aftermath of the Wisconsin game -- coincidentally to the Iowa-Wisconsin border -- where I gave a terrorist fist jab to every person in black and gold.  It was here that she finally admitted that she didn't yet understand why that happened, why it was that every person making an outward showing of support for one school's football program was apparently and immediately a longtime friend.  I gave the most honest answer I could: "Being an Iowa fan is simply joining a community of people, united in their irrational love for a school and a place and a group of post-adolescents they have never met, and their equally irrational hatred for people who attended a different school or love a different group of post-adolescents."  This sounds insane, and it is; "fan" is a shortened version of "fanatic," a word that, prior to the moment organized sports took hold in America, was generally reserved for revolutionaries and partisans.  Fanaticism was not to be celebrated; it was to be crushed.  Lauren may well have been slightly concerned by this, but she attempted to conceal it at the time.  And then came Michigan State, and Stanzi hit McNutt on the slant pattern, and the bar where she worked exploded.  Ten minutes after the game, while I was still hugging strangers and reveling in the euphoria, I got a text message: I now had permission to make her a fan.2  Mission nearly accomplished.

I had to finish this conversion -- it had taken on a life of its own by this point -- so I scored a couple of tickets to the Minnesota game, and Lauren suddenly got the entire weekend off, and we went for the full Iowa City experience: bar-hopping through Friday night, 6:00 tailgating wakeup call for Saturday, a brief stop at Carver-Hawkeye.  All systems go.

And then came one of the most excruciating football games I've ever witnessed.  I was openly complaining about the lack of offense.  She was asking questions about the marching band.  My plan was eroding with every successive three-and-out.  I needed a game-changer, and I got it three hours later in a downtown establishment.  Well into my seventeenth vodka tonic of the evening, I caught sight of a familiar face.  Two minutes, one drunken request, and a quick snapshot later, and my task was complete... 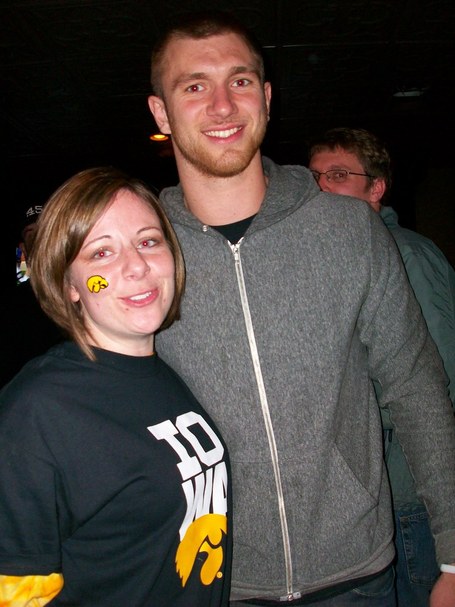 I had a long line of Iowa football jerseys as a kid (even that one with the wings on the shoulders).  I had an Iowa Starter jacket when the Fab Five of Michigan was preferred by every fourth grader in the state.  I had season tickets for 10 years.  I'll be repaying the University for my education until I retire.  And I've never had a picture taken with the starting quarterback.

It took Lauren one game.

1 -- A friend of mine once had a roommate who was a member of the LDS church.  The roommate would wait for the Jehova's Witnesses to come around, then invite them in to give them a copy of the Book of Mormon.  I'm thinking of doing the same thing with the people who come to my house every Saturday at 11:00.  "Please come in and have a seat.  I'd love to discuss the Book of Leviticus.  If you'll just take a quick look at this literature and watch a quick Tavian Banks highlight video set to AC/DC's 'Thunderstruck,' I'll be right back."