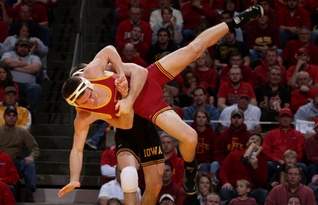 Iowa headed to Ames to take on Iowa State in their hotly anticipated annual dual meet Sunday night and came away victorious for the fourth straight time under Tom Brands.  In fact, Brands has never lost a dual meet to Iowa State since returning to Iowa to become head coach; he owns their asses.  The added spice to this match-up was the fact that it featured the top two teams in the nation, with the #1-ranked Hawkeyes vying for their 46th consecutive dual meet victory.  They won, ho-hum, nothing too exciting, right?  Yeah, not so much.

The early part of the meet suggested that it might be an Iowa rout.  Matt McDonough kicked things off with a bang by defeating Andrew Lang, 13-7.  Daniel Dennis followed that up by wrestling a fast-paced, back-and-forth match with Nick Fanthorpe that wound up tied 8-8 and heading into overtime.  Dennis won with a (literal) last-second takedown at the edge of the mat in overtime.  Iowa seemed to be picking up steam when Dan LeClere rebounded from a 5-1 deficit to force overtime, but he came up on the wrong end of a wild scramble with Nick Gallick.  Iowa regained the momentum (and then some) when Brent Metcalf came to bat and, after giving up an early takedown, entered BEAST MODE and thrashed Mitch Mueller before finishing him off with a pin in the third period.  Iowa rode that momentum to a victory at 157 lbs, with Aaron Jansson holding off Andrew Sorenson, 8-6.  At this point Iowa led 15-3 and was heavily favored in two of the remaining matches -- a blowout seemed well within their reach.  And then Iowa State found some old vein of Hilton Magic to tap into and things started going pear-shaped.

Unfortunately, every bit of Iowa momentum vanished during the ten-minute intermission period.  If Brent Metcalf was true to form two matches prior, then Ryan Morningstar was (sadly) every bit as true to form in his match, wrestling a tight, conservative match against Jon Reader and waiting until it was too late to open up on offense.  But bitching about Morningstar's tendency to wrestle tight matches is as constructive as wondering why Jamie Pollard's a douche -- some things just ain't gonna change.  One of the only bright spots of the second half of the meet followed, with Jay Borschel pulling away late to defeat Iowa State's Duke Burk, 10-4 (and even that win was marred by some late sloppiness from Borschel that prevented him from winning by something bigger than a normal decision).  The night's biggest upset came next, with Iowa State's Jerome Ward upsetting a shocked and lethargic Phil Keddy.  Iowa State followed that up with a dominant victory from Jake Varner (aided by some sloppy wrestling from Chad Beatty at the end of the match).  The only other bright spot (relatively speaking) of the second half of the meet was the final match, where the inexperienced Blake Rasing managed to hang tough with the much higher-ranked Jared Zabriskie before losing in overtime.

In all, Iowa went 4-1 in the crucial swing bouts, which was excellent.  The main stumbling block was not taking advantage of favorable match-ups at 174 and 184 and not preventing Varner from picking up bonus points for Iowa State at 197 lbs.  No one would have suspected it at the time, but Dennis' last-minute takedown and Metcalf's pin wound up being critical points for Iowa's eventual win.  In one sense, though, this was an ideal win for a guy like Brands: the ultimate objective (a dual meet win over a hated and top-quality rival) was achieved, but the means of getting there were so haphazard that there will be plenty of things to work on in training and little danger of becoming complacent.  Morningstar and (especially) Keddy really need to step it up for Iowa to obtain their ultimate championship goals and Beatty needs to wrestle smarter -- no one really expects him to beat a guy like Varner, but at this point he should be able to avoid getting major decisioned.  The win's the thing, though, and for the fifth straight year Iowa State came up short in that department.