The lady and I were going to eat at Breadeaux Pizza last night. Then we didn't. Consider the allusion in the title our way of making it up to you, Breadeaux. Or give us free pizza, whatevs.

It's one busy busy Sunday for us. First of all, there's the BCS Selection Show, which'll be going down at 7 pm. SPOILER ALERT: We're going to the Bluebonnet Bowl.

Then there's only the most important dual meet of the season: #1 Iowa at #2 Iowa State, at 6 pm at Hilton Coliseum. Here's the promo video, with Iowa's vaunted starting lineup:

I'm not sure Goldust is going to make weight at 133.

It's on IPTV if you're here in Iowa. If you're not, that really sucks; your only alternative is ponying up about $8 at the Cyclones' official site, which, fuck them.

As this is an open thread, comments go below, don't troll, don't use slurs, etc. etc. Y'all know the rules. But first, just to make sure this isn't left unsaid, a little editorializing:

If the Fiesta Bowl is indeed nabbing both non-BCS teams (both of whom, rest assured, have put together exemplary and admirable seasons) and the Orange Bowl goes ahead and takes Iowa, this will be one of the strangest, most inexplicable decisions in the BCS bowl era. It'd be one thing if the Fiesta took Penn State: they travel well, JoePa probably won't get many more chances to get back to Tempe, they didn't lose to just Northwestern, etc. etc.

But while it's undeniable that TCU put together a better season than Iowa did--we were semi-secretly hoping Nebraska would win and let the Horny Frogs get a shot at the national title--it's common knowledge that the bowl selections are primarily business decisions made within a loose framework of football guidelines (for example, Notre Dame can't get there at 6-6, etc). So when a team like Iowa has arguably the best traveling fan base of the at-large teams eligible for the BCS and has already accounted for all 17,500 of its tickets, and they get passed over for a MWC team that can't even sell out its own meager stadium, well, we have to ask: what on earth are the Fiesta Bowl people thinking?

We don't care a ton for conspiracy theories--life provides daily reminders of how impossible it is to keep a secret in the Age of Online Internet Email Netscape--but we can't help but wonder if this is a function of the BCS protecting itself and its conferences: sequestering and secluding the pesky non-BCS interlopers in their own bowl. Are they trying to avoid another (in their eyes, and theirs alone) "embarrassment" like Utah going undefeated and wiping the floor with Alabama in last season's Sugar Bowl? Are they worried about two non-BCS schools running the table and doing so while beating two

Because really, that's the only way any of this makes sense. If the Fiesta Bowl really wanted to sell the game out like they claimed, they'd assuredly do so with Iowa. They may or may not with TCU and Boise. If the Fiesta Bowl really always wanted Iowa since 1981 like John Junker claimed, they wouldn't pass on such a prime opportunity just to get TCU in the building instead.

Anyway, we can continue that discussion in the thread. That's my jumping off point, though, and feel free to educate me (and the rest of us) otherwise if I'm talking nonsense. I'm just baffled, though. 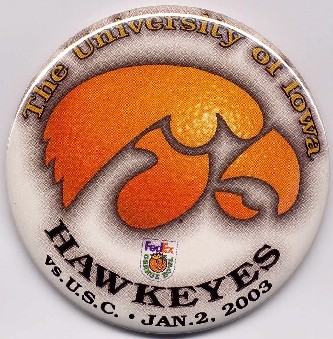