81-50: Andrew Brommer With the Performance of the Year

Share All sharing options for: 81-50: Andrew Brommer With the Performance of the Year 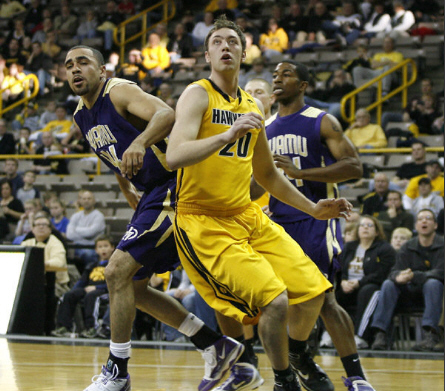 Andrew Brommer was called for a foul on this play. Probably. Or within a couple seconds, anyway.

First of all, get well soon, Coach Lickliter.

Second, Iowa registered their most dominant win of the young season with an 81-50 win. It was a lightly attended game, and even more sparsely-watched; the game wasn't even on DirecTV, instead banished to local cable and the absurd BTN online pay-per-view that I hope nobody bought. Seriously, fuck you BTN; just put it on one of the alternate channels or something.

In the absence of the Lickliter family (John and Garrett were also missing; ostensibly, they were both with their father and/or family), the Hawkeyes put up what will likely be their best offensive performance of the season; the team tied its franchise record for three-pointers made with 15. That Lickliter wasn't on the bench seems to have less to do with the offensive explosion than the fact that, well, it's Prairie View A&M. The Aggies (we're just assuming they're Aggies) haven't so much as finished in the top 300 of I-A over the last six seasons, and the only reason they're in the top 200 so far this season is their ability to get shellacked by legitimate programs. Once the vaunted SWAC schedule rolls around, we're pretty sure they'll dip right back down to sub-300.

The statistical leaders were A) Anthony Tucker, who hit 6 3s en route to a game-high 20 points. Tucker also corralled 15 rebounds--haha, no he didn't, he's like allergic to rebounds. He had 2, and they both made him break out into hives. Also, B) Eric May, who registered a double-double with 14 points and 11 boards. Can we stop pretending he's a guard already? He's doing a fine Jess Settles impression, though it's not the best on the team; that goes to C) Matt Gatens, who's getting pretty good at doing all the little things for a team that would probably prefer about 20 points a night from him instead, thanks. Gatens ended up with 12 points, 5 boards, 4 assists, and 4 blocks in 32 minutes.

But the real hero of the game was Andrew Brommer, the man whom we had started to wonder would ever get into a game as of a couple weeks ago. Brommer registered 10 minutes, and he made them all count. 3 points, 2 boards, 2 assists... and he fouled out.

This deserves its own paragraph: Andrew Brommer played 10 whole minutes against Prairie View A&M and fouled out.

Can you imagine what's going to happen once (hell, if) Brommer gets pressed into action against, y'know, a real team? He might start committing two or three fouls at once. Like when he's trying to hack someone, he somehow slashes them with a hockey stick. Or jumps offside. Or farts in church.

We don't know what the record is for fewest minutes played before fouling out, but Brommer's probably pretty close. 5 fouls in 10 minutes is awfully impressive. Hell, give us an Iowa jersey and a baseball bat, and we'd still probably struggle to get to the 5 mark in under 10 minutes. Are you allowed to chase someone with a baseball bat as long as you don't hit them? Because if so, we'd probably get a couple "fouls" out of the way early, and--presuming the ref doesn't take the bat away or we don't get beaten mercilessly by the opponents--then we'd chase someone around instead. Seems more effective than a regular old screen.

What about nunchaku--or, translated into American English, numchucks? That kind of evens the score a bit, mainly because you could do a lot more damage, but at the same time this could happen.


Yeah, tell us you couldn't totally see Brommer doing this to himself in the post while trying to play "defense."

I guess the point is: let's put at least a Louisville Slugger in Brommer's hands next time and see what happens. We could use the amusement, and he could probably use the help.