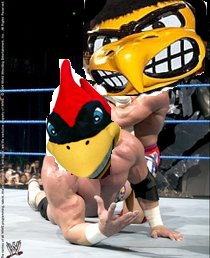 The much-mocked beloved Cy-Hawk Series is back in action tonight, as the #1-ranked Iowa wrestling team heads to the now curtain-free Hilton Coliseum in Ames (6pm CST; on IPTV and Clone Zone online streaming, which will run you $8.95 for a month's access) to take on the #2-ranked Iowa State team in what will likely be the biggest dual meet of the season.  Let's hope this 1-vs-2 matchup goes along the same lines as Florida-Alabama did, with Iowa in the Alabama role, grinding Iowa State into dust.  Iowa has won their last 45 dual meets in a row (including the last 31 road meets), a new school record.  They've been kicking ass and taking names (no UNI-style miracles needed for these Hawks -- they treat teams like Coe and Cornell like the jobbers they are), but the competition ramps up significantly here.

And while these two teams are both very good, let's be honest -- they aren't even across the board.  Far from it, in fact.  Iowa has a significant advantage at 149 lbs; Iowa State has a significant advantage at 197 lbs and heavyweight.  It's going to be important for Metcalf to get bonus points at 149 and Beatty and whoever goes at heavyweight (sounding like Rasing) to prevent Varner and Zabriskie from doing the same for Iowa State.  Wins for Iowa in either of those weights would be a massive (and wholly unexpected) boost.

Iowa also has solid advantages at 174 lbs and 184 lbs.  At 174, Borschel has moved up #2 in the nation and has been looking more and more like the dominating Borschel of old.  His opponent is Duke Burk, ranked #12 and sporting an 0-2 lifetime record against Borschel.  At 184, Keddy is also at #2 in the nation and has been looking pretty solid.  He's taking on Jerome Ward, ranked #18 in the nation.  I don't think they've wrestled each other yet.  There's definitely a gulf in talent between the Iowa guys here and their opponents, but it doesn't seem as massive as the gulf between the guys noted above.  Assuming these five matches go as expected, the meet should be decided on five swing bouts.

125 lbs -- Matt McDonough (Iowa) vs. Andrew Long (Iowa State)
McDonough is 7-0 on the year and has been a very pleasant surprise.  Everyone expected a drop-off with Charlie Falck gone, but McDonough has stepped in nicely and prevented a substantial drop-off.  Long is 9-0 on the year and has also been very solid.  Both guys are former prep standouts in Iowa and wrestled each other often in their high school days, so they'll be pretty familiar with each other's strengths and weaknesses.

133 lbs -- Dan Dennis (Iowa) vs. Nick Fanthorpe (Iowa State)
Dennis is 8-0 on the year and has been on a tear, scoring bonus points in most of his matches.  Fanthorpe is coming off an injury and may be rusty.  These two wrestled to a tight 4-3 Dennis decision at the Midlands tournament a year ago in their only prior meeting.  These two guys are pretty evenly matched, but between Dennis' hot streak and Fanthorpe's recent injury, the edge should go to Dennis.

141 lbs -- Dan LeClere (Iowa) vs. Nick Gallick (Iowa State)
With Marion and Slaton both out until second semester, LeClere remains in control of this spot and has done well so far, going 7-0 and looking strong.  Like Fanthorpe, Gallick is also coming off a recent injury and may not be back in top form yet.  LeClere is 2-0 lifetime against Gallick, both both matches were very close.  That seems likely to happen again, unless Gallick is really hampered by his recent injury.  Needless to say, if either Fanthorpe or Gallick are out of action, these weights should swing towards Iowa fairly comfortably.

157 lbs -- Mystery Wrestler X (Iowa) vs. Mystery Wrestler Y (Iowa State)
157 remains the weakest spot on Iowa's team, with no one out of the trio of Aaron Janssen, Matt Ballweg, and Jake Kerr stepping forward to take command of the weight class.  Fortunately, it shouldn't damage the team too much in this meet, since Iowa State isn't very settled at this weight class, either.  Nate Carr and Andrew Sorenson figure to be the choice for Iowa State, and neither guy has stood out much this year.  This weight looks like a complete crapshoot.

165 lbs -- Ryan Morningstar (Iowa) vs. Jon Reader (Iowa State)
Morningstar is off to a solid 5-0 start (and has even picked up a few blowout wins over his lesser opponents, proof that he can do something besides wrestle nail-biters), but skipped Iowa's East Coast swing last week to rest a few injuries.  By all accounts, he's ready to go for this meet.  Reader is also off to a 5-0 start and has been looking good himself.  Morningstar has a career 3-0 record, but as you'd expect with him, all three have been razor-thin decision victories.  Between Morningstar's tendency to wrestle conservatively (to put it mildly) and Reader's obvious quality, it should come as no surprise that this is another crapshoot.

WHAT IT ALL MEANS
If Iowa wins three of these five toss-up matches, they should win the meet, unless Iowa State wins the other five matches with heavy bonus points (seems unlikely).  I think they have a good shot to do that.  They've had great success against the Cyclones (Iowa is 3-0 in meets against Iowa State since Brands took over as head coach) and between the confidence some of these Iowa guys have displayed (McDonough, Dennis) and the potential that injuries have weakened Iowa State, there should be a slight edge to Iowa here.