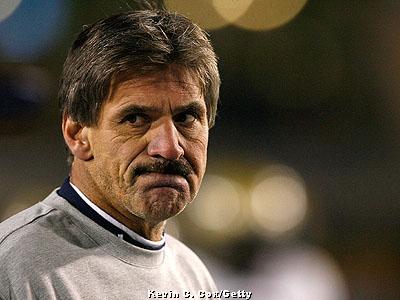 Obviously Iowa isn't playing today, but some of the games today (most notably Texas/Nebraska) do matter in terms of what bowl we end up in, so the games aren't irrelevant or anything.  Plus, it's the last real football Saturday of the year (sob) as well as the second-to-last chance to bask in the greatness of The Tebow (not sob).  So place all your random musings, hate-filled rants, and kind-hearted mockery of Messrs. Zook, Wannstedt, and Pelini (to name but three easily-mocked coaches) here.  You know the rules.
FYI: This may also serve as your open thread to discus the Iowa-Prairie View A&M hoops game as well; it's not on TV and I'll be damned if I'm paying $2.99 to watch it on BTN's streaming video.  If anyone else has that urge, I encourage you to instead Paypal $2.99 to me (my email's at the bottom of the page) -- I guarantee I will find something better to spend it on.