Share All sharing options for: It's Not Plagiarism If You Link to It Is Up Seven Dollars

PROGRAMMING NOTE: We will be liveblogging HATEBOWL at 5:00 CST.  Television coverage available on NFL Network.  Be here. 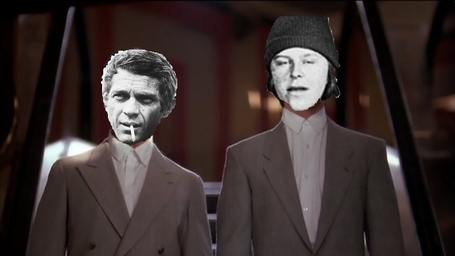 These are definitely not my underwear...

Leaving Las Vegas.  I'm back from Sin City; after 36 hours of non-stop gambling, I got on a plane $7 richer than I was before.  It's unquestionably my best finish in Las Vegas, as every other trip has finished with me deciding whether to spend my last money on food or airport parking.

I stayed at Caesar's Palace, which is a fantastic experience.  Great food, bars aplenty, excellent sportsbook (though it's no longer the supreme book; the Venetian is a gambling wet dream), but marred by the fact that there is a Pussycat Dolls Lounge and Casino located near the sportsbook.  Far be it for me to chastise the presence of scantily-clad hot women, but the Pussycat Dolls?  This thing is the largest monument to abject mediocrity and unsubstantiated hype west of TCF Bank Stadium.

Orange You Glad I Didn't Say Pizza Pizza Bowl?  Bowl week brings the typical bowl week stories: The players are having fun, their hotel is really fancy, Jamie Foxx rolled up to some of the players with some ladies in tow, Lady Gaga is playing New Years' Eve for an obscene amount of money (and Hlas?  I'm pretty sure it's "Mr. Gaga."  Just FYI.), Ricky Stanzi has settled comfortably into his role as team spokesman and leader, there may be a massive shakeup on the offensive line, Adam Robinson is doing the old Vanilla Ice thing on the back of his WAIT WAIT WHAT DID YOU SAY ABOUT MASSIVE OFFENSIVE LINE SHAKEUP?

You might think that senior Dace Richardson, who’s coming back from a broken leg suffered against Michigan State on Oct. 24, was in the lineup. He was on the field and participated in drills, but he wasn’t a starter.

The right side was switched with senior Kyle Calloway sliding down to guard and freshman Riley Reiff going to right tackle.

Why did this stand out? Calloway has started all 36 games of his Iowa career at tackle, including the last two seasons on the right side.

"He’s been there for the majority of the bowl prep," senior center Rafael Eubanks said about Calloway, a 6-7, 320-pounder. ". . . Today, I guess that’s where he would be, but I don’t know what they’re (coaches) planning. If Dace comes back, they might switch around again. But if we played tomorrow, Kyle would probably being playing guard...."

It might be a response to Georgia Tech’s personnel. The Yellow Jackets (11-2) have a monster D-tackle in T.J. Barnes, a 6-7, 341-pound redshirt freshman. He’d be lined up across from Calloway. Reiff, a redshirt freshman, checks in at around 280.

"They have a guy inside at 6-7, 340," Eubanks said. "He’s going to be loads of fun. . . . Coaches always say I’m vertically challenged, so I have leverage already, so just keep my hands inside and stay low against a bigger guy like that."

I understand the premise; if the other team has 1995 Gilbert Brown in the middle, your undersized redshirt freshman tackle-in-waiting might not be the best matchup.  But is it really a good idea to move a four-year starter who has played virtually every game of the last two years at right tackle to guard on the verge of his final collegiate game, especially when the opposition's sole defensive superstar plays defensive end and will likely seek out the aforementioned freshman tackle?  I love how Reiff has played this season -- a viable argument can be made that he's been more effective than Bulaga -- but this seems like unnecessary meddling.

Rolling Blackouts.  No news yet on the Mediacom-Sinclair standoff, with the Iowa City/Cedar Rapids Fox affiliate set to go off the air for cable subscribers tonight if Mediacom doesn't either give in or hire Vigo Mortensen to do some housecleaning.  As it stands, despite the politicians' best efforts, about 330,000 local households are going to be unable to watch the game without a satellite linkup.

On the opposite side of the state, another battle is being waged between broadcaster and cable provider: Titan Broadcasting Management is threatening to pull Fox and CBS affiliates from western Iowa cable service provider Cable One at the stroke of midnight, thereby leaving two major football  television sources as color bars on the biggest football day of the year.  Viewers would miss out on the non-Rose Bowl BCS games, including the Orange Bowl next week and the BCS National Championship two days later.  Such is life in these modern times, where even free television broadcasts cost too much.