Share All sharing options for: Purdue Beats Iowa And Fine Fine Fine But We Need To Discuss John Lickliter Right This Very Second

First things first: Purdue 65, Iowa 54. It wasn't entirely unexpected, of course, but at least Iowa made a game of it, leading 27-26 at the break and making the #4 team in the nation work for 40 minutes. Okay, 38 minutes and 30 seconds, but you get the point.

All the familiar culprits are there: Iowa's lack of depth hurt them down the stretch, Purdue's superior athleticism forced them into too many turnovers for their own good, and a second-half 13-2 spree by the Boilermakers doomed the Hawkeyes. Yes, Iowa put on a run, but it was only to cut a 16-point lead to 8. Horseshoes and hand grenades, folks.

The men of the match for Iowa, statistically speaking, were Aaron Fuller with 16 and 8 (and really, it felt like he had about 12 rebounds; such is the way of a slow-paced game, I suppose) and Eric May; May seemed to be the token defensive rebounder (8 of the team's 16 on the defensive glass; again, he's a guard) and 11 points.

I suppose it's necessary to credit Purdue's players too, since they won and all; E`Twaun Moore had 21-7-3, and it seemed like every shot he made was right when the Hawkeyes didn't need to give up points. Robbie Hummel only went 5-12 from the field, but he drew plenty of calls--some of which were warranted, unlike Jarryd Cole's clean swat in the second half--and ended up with 16 points.

That all out of the way? All that taken care of?

For those who missed the game, first of all, shame on you*. Support your team**. Second of all, we need to inform you that you missed John Lickliter--son of Todd, The Mighty Midget, El Future Accountant--getting crunch time minutes against a top five team. It wasn't exactly by choice, as Cully Payne was completely spent and battling leg cramps throughout the last 10 minutes of game time, but it had to happen. Anyway, it started very badly, with Lickliter forced into defense on a 2-on-1 fast break. We've looked and haven't found it anywhere, but trust us (and the livethread's comment section) when we tell you it was a large black man dunking HARD on a helpless, falling Lickliter on an alley-oop. It was every bad stereotype you know about basketball, writ large.

Then something strange happened, something you absolutely would not believe if you didn't witness it personally. That little bastard got hot. AND IT WAS AWESOME. We'll say no more and just cue the video, courtesy storminspank:

Yeah. THAT JUST HAPPENED. Mr. Five Foot High And Fallin' was off his ass last night. There's no other way to put it. It's not like he dropped a 20-pointer on Purdue or swung the game or anything, but, like, I didn't see Jarryd Cole getting the bluehairs off their feet, you dig? It can't be overestimated: the accountant-looking, walk-on son of Mr. Accountant-Looking Head Coach was pressed into duty against a top five team, got shamed at the outset, then put his head down and got after it. That is simply awesome.

So we propose this. For the duration of John Lickliter's time at Iowa and before, we've just referred to him as Li'l Lick, even though the literal interpretation of that is kinda weird and gross (whatever, it's not our fault; people at Butler were calling The Elder "Coach Lick" before he even came here). But for swinging titanium balls against a top 5 team, we really owe it to young John to somewhat disassociate him from his father when it comes to references. 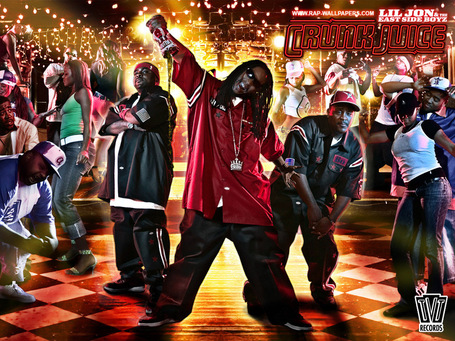 Seriously, I don't care what John Lickliter does the rest of the year (excepting felonies, but we're probably safe on that one). He took Chris Kramer on a fast break. Read that sentence as many times as it needs to sink in. It happened. And for that, he has a pass from us for the rest of the year. Get it at, youngin'. That was awesome.

*Sure, I missed the entire first half at the gym on account of ignorance of the tipoff time, but in my defense... who starts a weekday game at 6 pm? Barbarians, Big Ten, the lot of you.
**See above.