Share All sharing options for: It's Not Plagiarism If You Link To It Will Totally Shoot Its Way To Glendale If It Has To

INPIYL2I is the BHGP daily roundup of news, gossip, and good stuff from Blogfrica.  Send your tips to hawkeyestatebhgp@gmail.com. 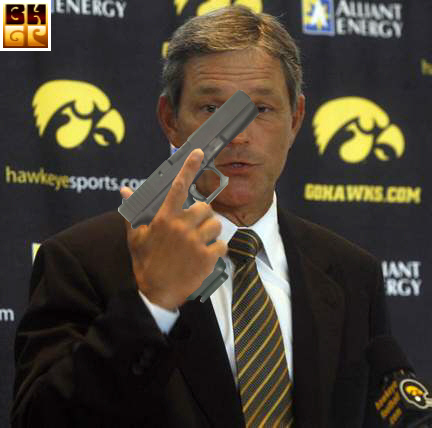 "Just give us the Fiesta Bowl and no one has to get hurt."

We Didn't Eat All That Ro-Tel For Nothing, Dammit.
Kirk Ferentz and Gary Barta held a press conference yesterday to kill a few birds with one stone: recap the season, update injuries, address those persistent Notre Dame rumors, and do a little politicking for the BCS.  The good captain will never be mistaken for Mack Brown on the handshakes-and-baby-kissing circuit, but he laid out a case for Iowa anyway.

As far as our football team, I'm not here to pit us against anyone else, but I think a couple things really stand out. If you look at our team, the way they've competed on the field, the head to head results that we've had, we did beat six Bowl eligible teams. Two of them were non conference games. So we're proud of that certainly. And I thought our guys did a great job taking a very challenging road schedule, and they embraced that with four victories and an overtime defeat at a very, very tough opponent's home field.

And if JoePa decides to play the "living legend" trump card, well, Ferentz has a plan for that too:

The best way we can counter that, maybe we can coax Coach Gable into coming with us if we play in a Bowl. He is a living legend, too. Put his record up against anybody in any sport, I can't imagine anybody is better. Maybe we can convince him to go with us, and we'll throw in Coach Fry, too, maybe he'll jump in there and try to balance it out a little bit, because we've got a lot to overcome in that regard.

WOO!  SUCK ON THAT, PATERNO!  GABLE WILL TIE YOU INTO A PRETZEL, OLD MAN!  Ahem.

And as far as those ND rumors...

I'll give you the same answer I've been giving people and we give recruits all the time. I've been sitting here for 11 years now, and the people that throw it out in recruiting, my typical response would be to just ask our prospects or any prospects, to ask that question right back to the team that's throwing it out there. ... I can just tell you what I've been telling people for a long time; I like it at Iowa. I've had paychecks from three different places now since 1981. My first full time job was here. I'm not a vagabond coach, and I like it where I'm at. I've enjoyed every day not every day, but most days, and you know, I don't see things changing here.

That's about as definitive as you're going to get out of Ferentz, frankly.  For the expanded version, check out Morehouse's piece on the matter. 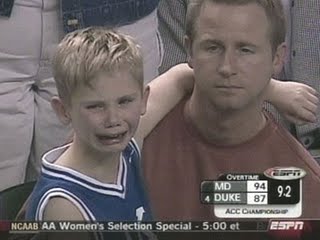 He still can't believe Duke lost to a >shudder< Big Ten team.  The horror... the horror...

For One Night At Least, We Are All Badger Fans.
Two pieces of history were made last night: the Big Ten actually won (by a score of 6-5) the accursed Big Ten-ACC Challenge in basketball, and mighty DOOK actually lost a game to a Big Ten team in said Challenge.  Prior to last night's tussle in Madtown, the Dookies were 10-0 in Challenge games with an 11.7ppg margin of victory in those ten contests.  The Badgers leapt out to a lead and held on behind a solid effort from behind the arc (40.0%), an absurdly low number of turnovers (4!), and strong efforts from Trvon Hughes (26 pts) and Jon Leuer (17 pts, 7 reb).

In addition to Wisco's upset win over the Blue Devils, Ohio State chipped in a blowout victory over Florida State (77-64, paced by Evan Turner's 25-13-6; if he isn't B10 POY, it'll be a farce) and Illinois proved that Clemson's EPIC CHOKEJOB prowesss is not limited to just football -- the Tigers blew a 23-point lead, got outscored 49-27 in the second half, and wound up losing, 76-74.  The stench of failure is strong at that school; good luck in that ACC Championship Game on Saturday, gents.  Meanwhile, Minnesota proved why you should never rely on them to win anything, ever, and Michigan lost to Boston College in the other Challenge action last night.

But if there's no curtain, where will Jamie Pollard go to cry his inconsolable tears?
Two years ago, when Iowa traveled to Ames to take on Iowa State in their annual hotly anticipated dual meet, former Iowa State head coach Cael Sanderson and Athletic Director par excellence Jamie Pollard devised the ingenious plan of lowering a bright red curtain in Hilton Coliseum and limiting attendance to 9,000 (over 5,000 below capacity without the curtain), ostensibly "for the atmosphere" and to preserve some sort of "home court mat" advantage... and of course to limit those heathen Iowa fans from attending.  The decision was widely ridiculed for being both cowardly and fiscally stupid, considering the rabid turnouts the Iowa-Iowa State duals tend to engender (21 of the 25 largest dual meet crowds in NCAA history) and the fact that a sport like wrestling and an athletic department like Iowa State's can hardly afford to turn away money.  Good news, then: current head coach Kevin Jackson thinks the curtain was stupid, too.

"We're trying to fill our arena, we're trying to put 15,000 in Hilton Coliseum," first-year Iowa State coach Kevin Jackson said. "I personally don't like the curtain being up and don't want to ever see it come back. ... I want to create the atmosphere we created when I was competing," he said. "We never thought about putting a curtain up."

You mean, the atmosphere of competing in front of a legitimately sold-out crowd is better than competing in front of a curtain-enforced sellout?  Color us shocked.  Don't forget: Florida versus Alabama isn't the only 1 versus 2 match-up in college sports this weekend -- the #1-ranked Iowa wrestling team heads to Ames to take on the #2-ranked Iowa State team on Sunday evening.