Urban Meyer Resigns From Florida; May We Suggest A Replacement?

Share All sharing options for: Urban Meyer Resigns From Florida; May We Suggest A Replacement?

Sports fans nationwide have undoubtedly already heard the shocking news about Urban Meyer: the Florida head coach announced this evening that he would be stepping down from the Gators after their bowl game. Meyer, who is only 45 years old, cited health concerns after years of chest pains--the latest episode coming after the SEC Championship Game:

The night that Florida lost to Alabama in the Southeastern Conference title game, Florida Coach Urban Meyer awoke in the middle of the night with severe chest pains.

He had suffered from severe chest pains the past two years, but this time was different. He lost consciousness, went to a hospital in an ambulance and underwent more than nine hours of testing.

That night was the tipping point for Meyer, 45, who stunned the college football world Saturday by announcing that he was stepping down from coaching.

"There was no heart damage," Meyer said. "But I didn’t want there to be a bad day where there were three kids sitting around wondering what to do next. It was the pattern of what I was doing and how I was doing it. It was self-destructive."

You'll really want to read the entire article linked above, written by Pete Thamel for the New York Times. Urban Meyer's quotes are both open and personal, the type told by a man who genuinely believes he has just saved his own life.

Thus, though it completely sucks for Florida fans that such a fine coach is calling it quits so soon, they can at least turn their attention to a replacement without heavy hearts or guilt over insufficient mourning; Meyer is alive and well, after all, and even if he never coaches another game he's been so handsomely compensated that money ought never be an issue. Gator fans may just issue him the heartiest of Thank Yous, embrace him as men do, and then let him just be a father as they go about their business.

And that's where Black Heart Gold Consulting would like to come in and help.

The first issue Florida must address is the nature of the departure. This is one of the very rare instances where a coach leaves a program without said program facing any immediate major problems. Florida's on-field productivity is nigh unimpeachable, the institution isn't facing any NCAA penalties, and he's not even stripping the assistant cupboard for his new move.

Thus, there's really no necessity in cleaning house or otherwise unnecessarily creating turmoil. Save recently departed DC Charlie Strong, the framework's still all there. Hiring from within, then, is the natural first choice.

The aforementioned Strong was the most likely head coaching candidate on Meyer's staff; unfortunately, Louisville realized that first, and it would take large amounts of superdickish legal-fu to get him out of the Louisville contract. No unnecessary turmoil, remember. Florida's offensive coordinator is Addazio, whose performance this season prompted one Orson Swindle to tweet this just the other day:

Yes, we feel hiring him would not be the finest, least outrageous of moves.

No, there really is only one answer here: 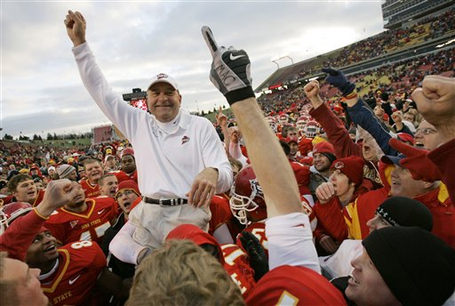 Experience? Check: McCarney was the head coach during Iowa State's most prolific stretch in program history, and his team record of two bowl wins may never be equaled. Seriously, it's like Johnny Vander Meer throwing two consecutive no-hitters. It's just never ever supposed to happen. Multiple bowl wins, people! That's good enough for ISU, and it should be good enough for Florida.

Moxie? Check: McCarney is a fiery presence on the sideline, something that has always translated well to his players. Rest assured that with McCarney at the helm, Florida will always beat their fiercest rival*.

Recruiting? Check: McCarney is as revered as any collegiate figure in central Iowa, even so many years after his departure from ISU. Why, as a high school senior in the Des Moines area, I was terrible at both football and academics. And STILL, both my coach and academic advisor kept telling me, "Go to D-Mac, go to D-Mac." I told my parents and they said something about a community college. Whatever.

There you go. Nobody else has these qualifications. Oh, Bob Stoops won a title? Yeah, but that was with Oklahoma. Dan McCarney won an Insight Bowl with Iowa State, and that is as likely as convincing Natalie Portman to give a hobo a blow job. Dan McCarney, people. Make it happen now. Black Heart Gold Consulting has spoken, and now we demand our customary 6% of the contract as a headhunters' fee. Hey, we gotta make money too.

(Oh, and seriously: may this be the last serious health problem Urban faces until his children are old and gray. Life's short enough as it is. Go read EDSBS' farewell. Go go go. And then go tell Florida to hire Dan McCarney.)

*IMPORTANT NOTE: as long as Florida's rival is Iowa.