Share All sharing options for: It's Not Plagiarism If You Link To It Spent The Night In A Very Uncomfortable Bed

Jesus Fucking Christ.--Well, we might as well get this out of the way, right? Anthony Tucker, he of the freshman 15 (except instead of getting fat, he missed 15 games for one of any number of problems), is suspended indefinitely from the team. Guess what he's in trouble for. Go on, guess. You'll never guess.

Officers arrested Tucker, 20, at 2:05 a.m. at The Lodge apartment complex near highway 6, according to police reports. He was taken to the Johnson County Jail and was released between 10 a.m. and 11 a.m. this morning after posting a $325 bond. He has pleaded not guilty.

The police activity log shows officers were called there after receiving a 911 call that "sounded like a problem with a cab and a fare," but the call was disconnected and officers were unable to call back the number.

In the same report, it shows someone tried to assault the cabdriver, but doesn’t say who.

Good lord. As you'll recall, this is not Tucker's first public intox arrest--13 months ago (again, during the season), Tucker got hammered downtown and passed out behind the Union Bar. On a very, very cold night. Once we found out he was going to be okay and that there were no ill effects from Winter Wonderland Naptime, we had an opening on a movie reference we'd never thought we could fit into Hawkeye sports: 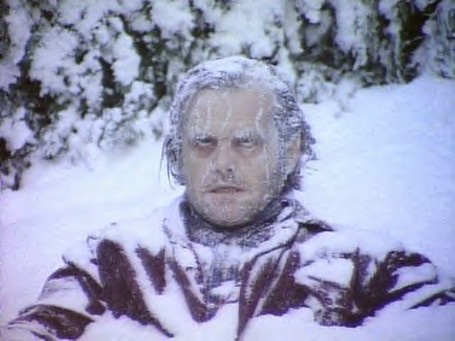 We'd Beyond Photoshop Tucker's head onto this, but that would ruin the sheer majesty of Jack Nicholson pretending to be frozen solid in an otherwise awesome movie.

This arrest, though, is substantially more troubling. While his first was just plain overserving to the point of passing out in public--highly inadvisable, but we can chalk that up to an isolated incident of  "kid being kid"--this has the potential to be a very serious disciplinary issue for Tucker. Getting a cab back from downtown to the west side of town isn't easy or cheap, and Iowa City cabbies are pretty hit-and-miss when it comes to manners (just ask Adrian Clayborn). Still, it got so heated that someone called 911, and that's definitely not a situation you want your players associated with. Yes yes, we know, innocent until proven guilty, and he pled not guilty. It's still Todd Lickliter's team, not the judge's. Most people get second chances. Not many get thirds.

Speaking of which, the real wild card in all of this isn't how much time Tucker's going to spend planted on the bench (obvious answer: LOTS), but which blood vessel exploded in Todd Lickliter's body when he found out. Seriously, he may as well issue a "God obviously hates me." He's having to deal with this drama, and his old school is beating teams by making time disappear from the clock.

Ken O'Keefe runs away with Headline Of The Year honors with this late stunner--We get what KOK was getting at here, with the defense's motto and all. We get it. But man, can't we get him a dedicated PR agent for Christmas? Or something?

"Yeah hi, Commissioner Delaney. This is Missouri calling back, just wanting to, y'know, touch base... we were in the shower and thought maybe we heard the phone ring... you have our phone number, cell number, email address, and license plate numbers just in case we're driving and you have to get back to us by having a cop pull us over... just... call us. K, lates."--Even though the Big Ten released only the coyest, noncommittal of statements on the subject last week, it's pretty obvious that the University of Missouri isn't going to miss out on the chance to expand on account of shyness. Missouri's AD, Mike Alden, batted a few eyelashes with TigerExtra.com (terrorist fist jab: Rock M Nation, of course):

I think the challenges we face as a league — and they do impact Missouri — are our television contract and our ability to have equal revenue distribution. I don’t think there’s any question that if we don’t get to that level at some point, we’re going to continue to find ourselves further and further behind the Big Ten, the SEC and probably the ACC, as well as behind Texas and Oklahoma, in particular, and maybe Nebraska in our league. Our hope would be that the league would continue to push harder in those areas, for a new television contract for more exposure and for equal revenue distribution.

This, of course, is all about as helpful as flirting with a stranger in front of your spouse to strengthen your marriage. That said, this isn't exactly a great marriage, since the Big XII treats Missouri about as well as Don Draper treats Betty, and what a handsome, charming, intelligent fellow this Big Ten is. And he's eligible!

Still, it should be noted that Alden doesn't take the bait when it comes to explicitly denouncing the Big XII or explicitly endorsing the Big 10. ADs don't get that high up without being smarter than that. He--like all decently responsible administrators--knows the status quo, while in need of improvement, is still Priority One until he's got an offer in hand from the BXI. That's obviously still a year away if it happens at all, which is hardly a guarantee.

But that's all CYA. The message is loud and clear from Alden: "revenue sharing maintenant," and since the Big XII are still 3-4 years away from being able to renegotiate a laughable $80 million/year deal (over $100 million less than the BXI or SEC), there probably isn't a whole lot the conference can do to satisfy the Missouri brass between now and the 12-18 months the Big Ten gave itself. So really, this plausibly ends one of three ways for the Tigers.

Aside from witnessing the wonderful power of magic and concentration, #3 is a vastly inferior option.