Glendale, Arizona: Is this place worth all the fuss?

Share All sharing options for: Glendale, Arizona: Is this place worth all the fuss?

It would be understandable if an alien from outer space landed in eastern Iowa this past week and after some basic human interaction deduced that Glendale, Arizona was some sort of Holy Land.

On Saturday afternoon the Iowa Hawkeyes, along with every other bowl eligible team in college football, will learn to which bowl game they've been invited. It may or may not be a crucial moment in the history of the program, but let's consider the question.

The Hawkeyes achieved new heights this year by winning their first 9 games of the season, a feat never before accomplished in the history of the program. The great start rocketed the team into the Top 10, and once the BCS rankings came out Iowa was officially part of the early national championship game discussion. We all know what happened in that 10th game, and the 11th for that matter. The Hawks rebounded against Minnesota in their final game and now sit with a pretty impressive resume for bowl executives to chew on. Since bowl games are invitationals beauty is in the eye of the beholder, and Iowa fans would be wise to brace themselves for a funky outcome.

There are as many scenarios that point to Iowa being invited to the Fiesta Bowl as there are scenarios that do not. One thing most people seem to agree upon though is there doesn't seem to be a BCS fallback position for Iowa. There appears to be so few circumstances that would land Iowa in the Orange Bowl as to be a statistical impossibility. So it's more than likely the Fiesta or bust----with bust being the Capital One Bowl.

My mother taught me that whenever you are faced with a difficult situation write down the PROS and CONS, weigh them out, and go from there. So here we go...but given the inevitable unhappiness a Cap One Bowl will be met with, we'll start with the CONS.

CON #1: Iowa is not all that and a bag of chips. Reality bites and if the Fiesta snubs Iowa they will have to live with the fact that the team ranked behind them in the BCS Standings (who they beat straight up on the road) or a WAC team was ultimately deemed more desirable to Fiesta Bowl officials. That might be one hell of a tough pill to swallow, and will be a message loud and clear as to where Iowa is on the football landscape. Value, said a manager of a restaurant where I once waited tables, is wholly dependent upon perception----there is no such thing as real value. "It's not the size the actual steak that determines if the customer feels he's getting a good deal, it is the size of the steak he was expecting," he would say. Penn State is perceived as a big steak. Now it might be that if you actually put Iowa and Penn State on the exact same plate they would look alomst identical, but the Fiesta officials are hungry to bring in a team that they are certain will satisfy the appetite of the greater Phoenix area. That appetite may not be exclusively tied to potential travelers either, there may be other appetites that Penn State is perceived to satisfy that Iowa does not, and that is not good for Iowa going forward.

CON #2: Winning will be even more vital. Losing the consolation bowl game could be a huge blow, as it will validate the snub. If Iowa is invited to the Capital One Bowl they may not be favored by Las Vegas but that will not lessen the pressure to win. They will be the higher ranked team and they will be the team that thought it was deserving of a BCS bowl game. A let down could validate their second tier status. The truth is that LSU is a formidable opponent and will pose a huge challenge to any team, but perceptions are at play. A Capital One Bowl would be a must win game.

CON #3: What more does a brother have to do? It would seem that starting a season 9-0, winning 13 straight games over two seasons, winning on the road in proven hostile environments, winning in an exciting and thrilling fashion over and over again, overcoming key injuries, playing three times in prime time and winning two and going into OT in the third as a huge underdog, and on and on. If all this does not capture the imagination, then what on earth will the Hawkeyes need to do next year to prove their worth? It may be the bar is higher (even too high) for the Hawkeyes unless they can prove themselves beyond a shadow of a doubt...kind of a Catch 22.

PRO #1: A win over an SEC team is always good for your resume. Many would say that a loss to a non-BCS team like Boise St. or TCU is damaging to a BCS program. I would respond that Alabama does not seem to be suffering any ill effects from their thumping last year. But, almost everyone agrees that beating an SEC team is good for your image, good for your self-esteem, and good for business (recruiting, etc.). That we would have to play in a non-BCS bowl to get this match-up may be worth it.

PRO #2: One more warm-up bowl might be needed. It may just be that Iowa isn't ready to play in a BCS Bowl game yet. Sure, they played well this season but there were all those close wins and perhaps this team is really still a year away from true elite play. Besides, the program seems to be at its best when expectations are muted and the scene is low-key. A BCS Bowl might have made more sense if we won the conference and didn't have a gimpy QB. This way Iowa may, again, be the only Big Ten team to win a bowl game and this could be the "I told you so" moment that leads to more favorable treatment down the road.

PRO #3: Disrespect is a great motivator. Iowa has been playing with a chip on its shoulder for two years now. It seems to be working. If Iowa continues to improve they might just find their way in to the National Championship game next year. Perhaps the worst thing this program could have happen is they become fat and happy this year. The Big Ten has a revenue sharing model, so no school receives a greater share of the profits based on which bowl they play. In fact, the Big Ten creates a travel budget for each bowl team, all remaining monies earned from a bowl are thrown into the Big Ten pot and shared by all---whether they played a bowl game or not. A team can spend less than are budgeted for and make a few more dollars that way, although teams usually spend more and pay for it out of their share of the revenues. For more on this go here. The goal on these invites then is to avoid them altogether and laser focus on qualifying for the National Championship game, all other postseason affairs after that are simply a case of where you like to vacation. The Rose Bowl, of course, is in our collective blood so that one is still a desired invite.

But, really, is the Fiesta such a big deal? Phoenix is no Pasadena and, for that matter, is it better than Orlando or Tampa? Especially if all it is going to do is create a false sense of accomplishment and screw-up a bunch of young minds and undermine our big run next year. 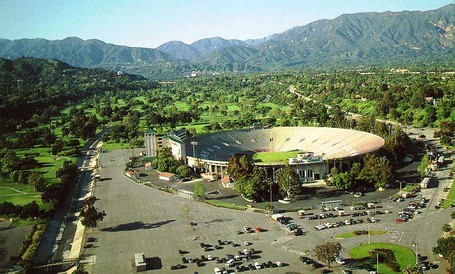