Share All sharing options for: Big Ten Expansion Warning System Returns to DEFCON 3; Come Out of Your Fallout Shelters 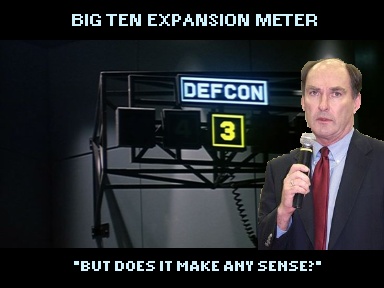 When Teddy Greenstein breathlessly reported yesterday on an impending statement by the Big Ten conference on expansion possibilities moving to the "front burner," there was a certain IT'S HAPPENING RIGHT NOW quality to it.  After all, how long could it take to vet a list of expansion candidates that every Big Ten blogger generated two years ago?

Turns out, longer than we thought (emphasis on the important stuff added):

Penn State joined the Big Ten Conference in June of 1990 and its addition has been an unqualified success. In 1993, 1998 and 2003 the COP/C, in coordination with the commissioner’s office, reviewed the issue of conference structure and expansion. The COP/C believes that the timing is right for the conference to once again conduct a thorough evaluation of options for conference structure and expansion. As a result, the commissioner was asked to provide recommendations for consideration by the COP/C over the next 12 to 18 months.

The COP/C understands that speculation about the conference is ongoing. The COP/C has asked the conference office to obtain, to the extent possible, information necessary to construct preliminary options and recommendations without engaging in formal discussions with leadership of other institutions. If and when such discussions become necessary the COP/C has instructed Commissioner James E. Delany to inform the Chair of the COP/C, Michigan State University President Lou Anna K. Simon, and then to notify the commissioner of the affected conference(s). Only after these notices have occurred will the Big Ten engage in formal expansion discussions with other institutions. This process will allow the Big Ten to evaluate options, while respecting peer conferences and their member institutions. No action by the COP/C is expected in the near term. No interim statements will be made by the Big Ten or the COP/C until after the COP/C receives the commissioner’s recommendations and the COP/C determines next steps, if any, in this area.

It appears expansion is imminent, to be sure, but not in the coming weeks or months, and likely not before the 2013 season.  This cautious approach is rare.  The SEC took less than four months to add Arkansas and South Carolina in 1990, the Big 12 was formed in a matter of weeks, and the ACC waited a whole three days to begin discussions with Syracuse, Miami, VT, and BC in 2003.  By contrast, it appears the Big Ten won't even begin discussing potential candidates until 2011.  The cautious approach is also wise, especially given the problems that the ACC has had since its hasty expansion six years ago.  We'll have plenty of time for all of this speculation; the Big Hidden Eleven will remain so for the near future.